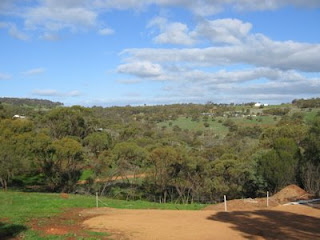 Recent rains have transformed the outlook at Jam Tree Gully 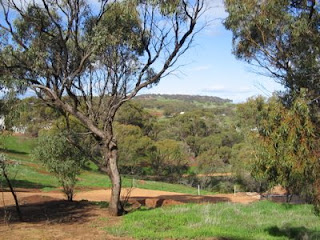 Yesterday I went with a friend to see the broadcast of Racine's Phèdre (staged at the English National Theatre in London) at Luna Cinema in Leederville. It wasn't the original French text, which is in rhyming alexandrines, but the modern free-verse translation by Ted Hughes.

It was a strange experience because, as the director pointed out in an introductory filmed segment, it was really an experiment -- elsewhere in the world, beamed live as it was performed (Australia had the delayed version) -- all the high-definition detail of film, using multiple cameras, that you wouldn't get if you were in the actual theatre, but essentially a stage performance (actors were encouraged to play to the immediate audience, not the larger, unseen one...).

Despite some of the negative reviews I'd seen on the net beforehand, the cast were very good. I'm not a fan of Helen Mirren, but she suited this Phèdre right down to the ground -- perhaps those critics who squirmed didn't fully realise that was what they were meant to do. (Of course, they may have been reviewing other performances of the same show.)

I had not read the Hughes translation before seeing the play/film. His text seemed to match the power of Racine's, though often so apparently "natural" as to sound like normal speech. The high points and moments of crisis that are so memorable in the original were not lost here. The whole thing was what (post-Greek, neo-classical, reinterpreted) tragedy should be -- compelling and yet unbearable to watch. It took a while to come back to earth afterwards.

My only complaint was that the Luna people so strangely kept the long preamble, which in the live broadcasts would have filled in the real-time before the curtain went up. Since ours was delayed, there was no need for all those repeating still slides and indeed, it's the only time I've heard a cinema audience do the slow-clap with impatience! It meant the actual film started a long time after the stated 1pm.

The second showing of this performance was today (Sunday), but there is a whole series of plays to come in similar fashion, which you can read about here. Next up is All's Well that Ends Well, in October.
Posted by Mutually Said: Poets Vegan Anarchist Pacifist at 4:03 PM No comments:

Double at the Dolphin

Last night we saw the double bill at the Dolphin Theatre -- a very short piece by Chekhov, The Proposal, and a play by Peter Shaffer, Black Comedy.

The first is a three-hander and seemed to last for only about fifteen minutes (though it was said to be thirty, it seemed to race), after which, surprisingly, there was an interval. We both felt we would have preferred to run straight on. The brevity of the piece was actually what made it so forcefully and bleakly funny. Director Jo Williams had deliberately chosen a "pre-revolutionary translation" of Chekhov's text; ironically, it seemed less dated than the 1960s' play that followed. Actor Cameron Clark, who played Ivan Vassiliyitch Lomov, seemed made of rubber and perfectly spineless, tackling the slapstick with relish.

Neither of us is a great fan of theatrical comedy, but if it's dry and intelligent enough, it's bearable.

The second piece, Black Comedy, was directed by Meredith Daniel. The three actors from the Chekhov were also in this one, backed by a further five cast members who were all good in their roles. The play was pretty ordinary farce, with a "clever" device (the action takes place in the dark when a fuse has blown, which means that light and dark are reversed throughout the play in order for the audience to be able to watch the action. This leads to a lot of deliberate stumbling and error that makes great demands on the actors -- how to look as if you can't see anything when of course you can).

The piece itself, apart from this device, has nothing surprising to offer, and the daft gay stereotype à la John Inman/Mr Humphries is very dated, as are many of the targeted topics, but then this is farce, and you don't expect it to be anything else.

The performance runs again next week from 8-11 July, and is a reasonably entertaining night out from a capable cast.
Posted by Mutually Said: Poets Vegan Anarchist Pacifist at 9:31 AM No comments: