Consuming Rebellions and the Need for Constant Non-violent Protest

Here are poems written in 'realtime' in support of James, Sarah and the other protesters who camped out, tree-sat, and were constantly present in resistance to the further destruction (it's not over, people!) of the Beeliar wetlands in Perth (on Bibra Drive in this case), late 2018.

These poems were intended to show that the protesters weren't alone, and that the effort to protect the environment needs to be a universal one; that ALL of our needs and interests intersect in this. As an extension of my notion of 'international regionalism', I am thinking more and more in terms of international responsibility regarding regional intactness, and cultural and identity intactness with respect to the natural environments in which they communalise and identify.

I think we need to be conscious of all language we deploy around this shared act of resistance to the damage being done, and that though the umbrella of 'extinction rebellion' covers many driven and passionate people (and I support the public push to show 'enough is enough' and to make positive change happen), it also fails in its naming. 'Rebellion' suggests a moment (that social-media burst of un-thought-out response that leads to chaotic action without focus, consistency or longevity), suggests an aggressive reaction to aggression that will yield little other than earth people's frustration.

I call this 'the buzz' - and once the buzz diminishes, people wander back to their flatscreens, their new phones, their consumerism. Change will come from non-violent direct action merged with language action merged with cultural and identity and gender-respect merged with thinking carefully about what we do and not letting the buzz create the peaks and troughs that have prevented a collective, concerted and long-term response to the rapacity.

Let's stop consuming as a form of 'equality' when consuming makes for inequality - wealth and privilege need to divest themselves immediately and 'property' be shared in common (and I don't believe in 'property' per se!). Let's stop participating in the consumerism ('western', 'eastern'... or any of its other manifestations within capital... culture is consumed by the consumer-machine of capitalism which purports to offer opportunities of consuming while deleting the basic universal freedoms of food, clean air, natural environment etc) ... the machine grinds to a halt without being fuelled. Let's concentrate on the priorities of social interaction: food, medicine, protecting the rights of the vulnerable, ceasing the exploitation, ending violent conflict, protecting environment and cultural rights attached to place (and spatiality)... and avoid as much unnecessary consumerism as possible.

Here are a few messages I've sent a couple of friends (especially James) in recent days:

*in protests for the environment there can potentially be a game of better-than-thou going on in which personal templates of 'best behaviour' and 'i'm less oppressing than you are' might be put on display, rather than a real deep caring for the natural world (privilege always allows such gambits - people living in the fallout of the  new colonialism of the latest version of the international arms trade get little choice to participate in non-violent resistance to consumerism when they are dying, having their houses destroyed, and their cultures annihilated).

so much activism out of (primarily western) privilege is a performance rather than the grit of protest. it's happening in poetry, too. people display what they feel they must, and don't mean it. a poet should say what they mean as a poet - good, vital... but don't say what they think people want to hear in the arts set... just to fit the moment of angst as the world overheats and dissolves. it doesn't stop the dissolving; it ironically feeds the consumerism. it is a form of consumerism.

too many times shot at, too many times hauled away to the lock-up, too many times been abused to take this pseudo-activism without a vomit feeling. so the performance moves on to what next week? i hope i am wrong, and i know many are long-term committed activists, and some are becoming genuinely aware, but the show must go on and poetry plays its part in that show. poetry actually has purpose to my mind - and not just the purpose of being poetry that the best people will applaud. i don't want applause, i want change - i want the tens of thousands of flooded gums dying around here to stop dying. only one way to achieve that - put our poems where are mouths are.

*i am bothered by 'extinction rebellion' because it reminds me of the buzz behind occupy (i was involved with that in london and cambridge) that dissolved into various forms of 'acceptance' for many. it's the cadre zeitgeist buzz people get and then it gets too hard to just stop the abuse by non-participation (the internet and phones etc have led to more of the destruction than almost anything else over the last twenty years). true non-violent 'rebellion' is (as i have just been writing) not participating in capitalist gain, in refusing to participate in the state machine, in being non-violent, in standing in front of the bulldozers, in believing in EVERY tree and every creature. there is no middle way - there is to my mind :the non-usage of animals, the replanting of damaged areas, and certainly using as few 'resources' as we can (from commuting to travel to how we live in houses etc). we all move, we all use these machines... but even if we lessen our impact it helps more than a raging that vents angst but doesn't actually do anything direct. direct action is standing by that tree, it's choosing to ride your bike rather than drive, it's not buying a new phone or even using one... it's going offline...

*the kids coming out against the damages against climate/environment was a positive action. peace marches (as tracy says) that are silent, are powerful. such collective actions work, even if in the moment then gone. but 'rebellions' and 'occupies' that become hype about who is connecting with whom, bother me as shared events of buzz rather than long-term commitment. not to say they can't be, but the 'beeliar group' potential is there - once the hype shifts as cadre groups fall out, it fails. rebellion is not what's needed, non-participation in the corporate military state that is doing this (and people go along with it) is what's needed. the moment people get a buzz out of an action, the action becomes secondary. there's no buzz - only commitment. that good feeling you get - of being alive... is because it's outside the buzz, it's because you're connecting with what you're trying to protect. that matters. city-driven protests too often become about the entertainment zone and social sets of the city - not the dirt and the air and the water and the birds and life itself. same with any concentrations of people over other forms of nature. yes, social media has enhanced empowerment in marginalised groups, but the abuse of rights of self and community has also happened repeatedly on a cast scale. voices of the self should never be lost in the mass voicing of the many — small communities speaking with small communities and so on, rather than the loss of rights of self by 'faceless' (that is face behind the avatar) attacks when every person's situation is different within and without community.

*so often these things are propelled by older people feeding on younger people (social-media companies might be the face of the young, but they grow older the more established they become... and take on values of conservatism) - on young energy that isn't necessarily (though it may be, of course) focussed - rather than the reality of the event itself. extinction is being caused by ALL of us - including the participants in the 'rebellion'. they could truly rebel by changing themselves to start with (some will, many won't, not really). sorry, but i've seen too much of this movement shallow stuff that sparks then fades as lives change etc. the coming-together has an energy, then it morphs. hope i'm wrong! i truly do. to stop consuming outside what is necessary to live would be a good start!

*that is, start addressing the problems with capitalism and the state and never give ground, with peace as your best friend. no peace and there'll be no peace. 'rebellion' intimates violence even if unintended and that's why we have the problems in the first place. they use it as a 'hashtag' (potentially the end of liberty in too many ways for too many) because it buzzes and attracts young people who want to have the buzz and think they're also being ethical. there's a category error in it all. beeliar writ large. and one needs to come in and out of these well-meaning but often unseeing gatherings and keep a steady line. they will fade as fast as the world is fading. as committed life activists, our function is to be steady, coherent, consistent, and persistent. you are all these things - use this commitment to help others stay committed and to not just tune into the buzz then tune out.


Anyway... here are some of the poems sent through to the tent (of James) and the camp as it grew and to Sarah in the tree: 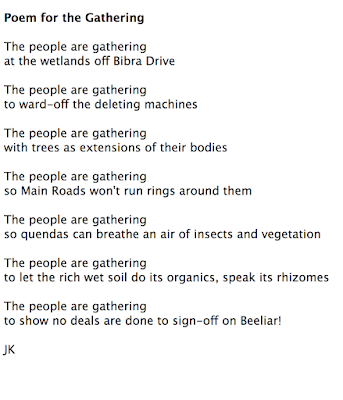 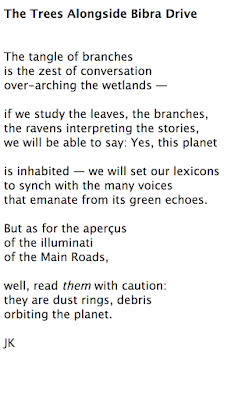 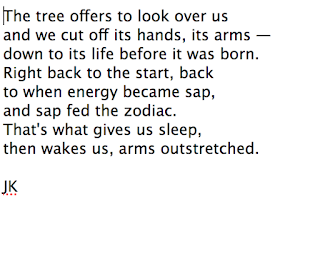 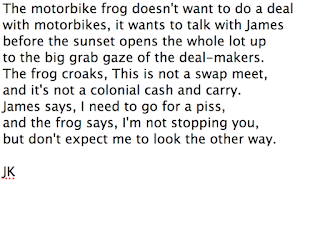 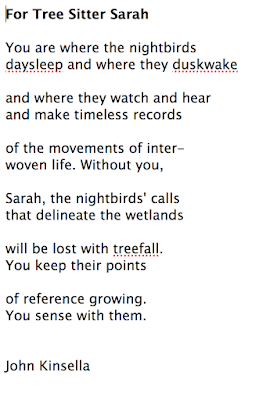 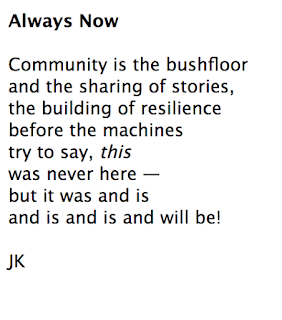 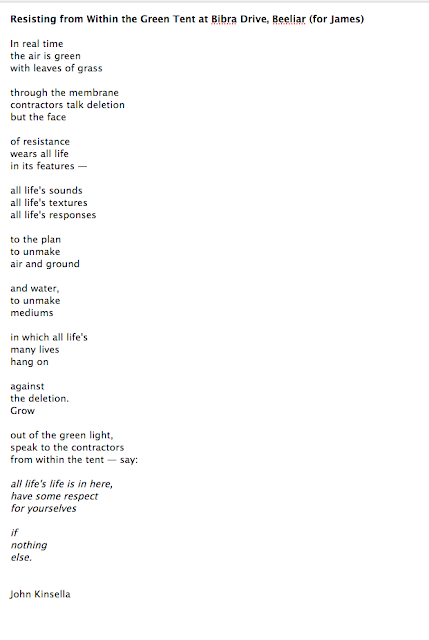 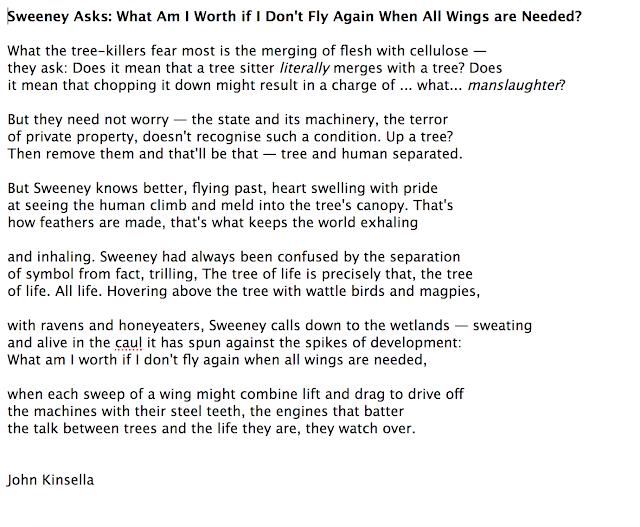