Saturday 24th September saw the opening by Will Yeoman of an exhibition that will run for 2 weeks (till 8th October) containing works by John Kinsella & Glen Phillips, as part of the York Festival. This exhibition is located on Ballardong Noongar Boodja.

Entry to the exhibition is free, and the artists' works are for sale.

You can watch & hear John reading a poem from his Divine Comedy: Journeys Through a Regional Geography at the launch here.

Some photos from the gallery: 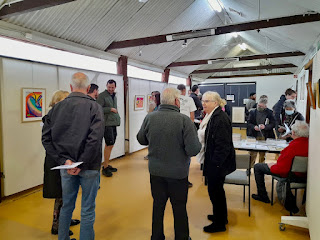 Posted by Tracy Ryan at 7:43 PM No comments:

Russian anti-war protesters were arrested for displaying blank signs. A British lawyer displayed a blank sign yesterday and a police officer threatened arrest should he write 'not my King' on it. Fascism has various faces, but always the same rule book. Monarchism is a particularly honed form and tool of fascism. Many media outlets in Australia are directing and controlling what is essential a colonial reassertion via the death of one monarch and the raising of the next. Those who do not communally participate are judged, and those who fail to participate in the public eulogies are frequently excoriated. The state is the state is the state, and an absent 'head of state' who functions through a proxy suits a colonial realm that purports not to be colonial, but is as much now as it ever was. It just has more effective propaganda and often unwitting propagandists to call on.

and any failure to switch the porch light on

is marked down as a location

of those refusing to mourn

the postage stamp of empire.

to impose the new order

which is the old order,

as we know, as the apophthegm

goes and goes in whoever’s

But this is protocol.

The face on currency

will face the other way.

In the colonies the delusion

is an amusement park ride.

Coconut shies at the fair,

a monopoly on copra.

before a protest, before the letters

that dance in their favour,

especially when the extras

they touched and put to heal.

A failure to put the porch light on

leaves a myth of origin in the dark.

All those reigning memories.

All those entertaining scandals.

All those sporting occasions.

All those Royal Command Performances.

All those Victoria Crosses.

All those struggles for Independence.

All those deaths.  All those.

And porch lights on down in Australia

with eyes out for dissenters:

‘those grubs’,  those anarchists.

A Funeral for the earth

whose rain we celebrate.

Mourning glory in the republic

of conscience. I was bullied

under the monarch’s portrait.

and any failure to switch the porch light on

is marked down as a location

of those refusing to mourn

the postage stamp of empire.

Posted by John Kinsella at 4:40 PM No comments: