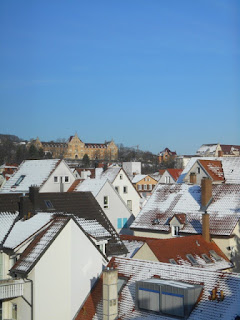 
How shall I still my soul so it won’t stir
against your soul? How shall I lift it over
you, elevate it toward other things?
Oh, I would like to leave it with whatever
is lost and wasted in some unfamiliar
dark, hidden spot that never rings
in answer when your deepest places do.
Yet everything that touches me and you
takes us together in the way a bow-
stroke draws a single voice out of two strings.
What is this instrument we’re stretched upon?
Who is the player that has us in his hands?
Such a sweet song.

A rejection of  "Order" in its relation to power and fascism, aesthetically & otherwise


Doing some background reading while working on Rilke's poems, I came across an article about his so-called Milanese letters, in which in 1926 he expressed an admiration for Mussolini and fascism. Deeply disturbing – so many great poems, but a dubious person -- as Clive James wrote, "no paragon of humanity", or elsewhere, more colloquially, "[i]n many respects Rilke was a prick". (As an aside I don't have time for here, James's wider-context comments provoked much discussion and disagreement.)

I have been thinking a lot about "Ordnung" or "order", here in Germany, immersed not in Rilke's country (he was born in Prague when it was part of the Austro-Hungarian empire) but in his language -- or one of his languages...  Even in the "Love Song" above, whose ironies have to be appreciated, there is a sense of wanting, if one is to have a relationship, a clear, clean, unmessy one -- seeking purity of self (a kind of Ordnung too) which seems afraid of empathy. While working on my translation I also wrote a kind of response -- ringing or singing further, a "weiterschwingen" to the "schwingen"... which seeks to reject this obsession with Ordnung and its relation to fascism.


Disordered (a poem in response)

trailing disorder but in a manner
wholly cyclical, so sickening
to find in nature and “human nature”

circle, each das halbe Leben, a face
beaming back at you what you project
and I reject the aesthetics of clockwork

too, the metrical turn – I want to happen
across words like a finishing, fallible
streak, one more minor disintegration

violin, nor longing for dark and silent spaces
but giving a big bright fiddler’s hickey to
whoever holds us and is playing us if he’s there

Posted by Tracy Ryan at 7:24 PM No comments:

for Anton and Andree Gerland

Macaques. ‘Old World monkeys’. A Nobel
prize winner for literature also from Mauritius.
The headgear inserted into the brain cavity.

Literacy of God-lust. Shiny barred
cages to make it all easier. One could cast
an image, like an aspersion, film-feed.

object reason perception the common good.
Who violates no violation recorded. Official.
It is not a question. Response noted.

Touching a brain is a quotidian
actuality, reach in deep. Implant. Cared
for caregivers. Such stress behaves

Just one that didn’t quite take or take enough.
Sterility? In their gowns they all look quite fit.
Cult of outdoors when leisure timing.

Such legality. We should face consequences.
This activist, this call and response.
This treason against knowledge?
Jail me. Go on, jail me.


Please note: I use 'death camps' and Celan in this poem because to me anyone who can do this to an animal has the potential to do it to a human. It's problematical deploying such analogies, but I strongly believe it is relevant in this case. Whosoever the people are that can do that, they are killers and torturers and belong in the 'Doctors' Trial' of the Nazi trials after the war. The mentality is one they clearly share. My use means no disrespect to the human sufferers of such medical horror during the Nazi period. But unless we identify and highlight what allows people to do such violence to living creatures, we also risk the same horror of those medical experiments on humans happening again. JK

Posted by Tracy Ryan at 9:14 PM No comments:


A selection of John's poetry from across thirty-five years has just been published by Picador (2016). Here's the Poetry Daily feature: http://poems.com/feature.php?date=16822

Posted by Tracy Ryan at 9:01 PM No comments:

I merit merrit and what names
stood longer and will stand again
thin rising to blue sky to charred crow
to red wattlebird and honeyeater
to drown at the foot of waterbush.

Driving east into the Victorian
Mallee, and then the emptiness
of grassed plains that weren’t
grassed plains, where trees
are windbreaks to be harvested,
the essence of the Western
woodlands is clarified.
Its loss would be
an act of terror:
those emptying ‘farms’
that would come in its stead
blank slabs of old-before-their-time
graves, all creation knocked down.

Quandong is a shrub I was
overly familiar with as a child.
In the woodlands I cherish
it for its fruit, and for itself.
It speaks — listen, listen.
It wants its own space,
gets on well with its neighbours,
can take human projections.
But to be deleted is not in its vision.
It hears the pain of loss
as sandalwood does.

This great lung,
this great mind,
this great flesh and blood
and cellulose entity
is the powerhouse
of body and soul —
it is the vastly regional,
it is the specific and inclusive,
it is the everything we are.

This poem appeared in print version of The West Australian newspaper in September, 2015.
Posted by Tracy Ryan at 8:53 PM No comments:

For Yarloop and its People

This is an elegy for a town that has been
brutalised by fire. The town of Yarloop
where I lived thirty years ago and visited
barely six months ago was 'wiped
from the map' two days ago by a brutal
fire-front feeding on the brutal air of a brutalised
climate. The fire still rages out of control.
Is it irony that Yarloop was a milling town —
the tall hardwoods falling to its dizzying blade?
Is it irony that it was a railway town, its workshops
full of skill and pride and waiting out the Depression?
Is it irony a great Aboriginal poet grew up there?
Is it irony the irrigated paddocks burnt
to their veins and the water stopped coming
and the town was left desperate and vulnerable?
All those animals and birds caught by the flames,
spotting so far ahead they made new erosions
to join up with? Traffic diverted. Firefighters
worn and blistered and too overwhelmed
to join the dots. There's no time for metaphysics
or ecology or politics or hope. Just get the job done.
Maybe you have to have grown up there to know
how a greenie and a right-wing nationalist
can forget what the other bloke thinks
and dig in, stand in front of the flames.
It's no ritual of fire and earth and water and air.
There's no time for fucking around. No art. No poetry.
It's brutal. As brutal as poets and poetry.
More towns are threatened. Forests have been
vaporised and ashed. Evacuees retreat
from one town to another to evacuate
again. Two old men in Yarloop were
unable to escape and their remains
have been discovered in the pyre.
I am writing an elegy. Elegies
are brutal with loss. I weep
for the death of a layer of land
I know. I weep for all loss. And now
we wait for snow to come to a German town
where we have just arrived. Ensconcing,
settling, projecting to the burning place
we come from. The heat rays deflected back —
'Like spring here,' says a local. It should be frozen.
We wait for the snow to come to the medieval streets.
The town of Alzheimer's and the botanist
the fuchsia was named for, introduced to Ireland
and woven into hedges and a flower symbol
of West Cork. The flower late. Their bells ringing
fire fire. The burning. The brutal brutal burning.
And not eight days ago we couldn't travel
to Brontë country on the Yorkshire moors
because flooding had broken
the back of infrastructure. We
look for resilience, we long
for resilience, to know we could
and can do it too. It's brutal talking
about the weather. A pastime. An obsession.
This is an elegy. This is what I write
from where I am. I am no less there.
Last year and the year before
we were close to flames.
You never forget.
You want it to stop.
Even seeds opened by fire
know there'll be little to grow
towards, little to celebrate
on opening. And this is more
than human intuition, the river
Neckar running close to here
around an island, our isolation.

Poem from residency at Newton Institute for Mathematics in Cambridge


Surreal Möbius Elegy
Surreal numbers locate the real
global curve assigned to the shelf
for forty years to be lifted wholesale
by Einstein for his general theory
of relativity, his lights deflecting
off the rippling band of a mountain
lake, two sides to one story — band-
wagon I want to share with the lost,
with the obsessive of a pure discipline
who were laughed at, their theories
consigned to dark shelves; to locate
paths any error offers, to find a living
Minerva in plain song, the common
tongue — no display of dead wings.

Earlier, before this conversation, I had
been laughing over long-past and slightly
painful memories of a shake-the-foundations
poet, an American in Paris, an American
poet rowdy and disruptive around
ancient buildings he seemed to love —
a boat colliding with all other boats
on the narrow waters, resetting the word —
to be told he might in fact now be dead.
I changed tone and tact and turned one-
hundred-and-eighty degrees to reconnect.

I am shocked to find that he’s been
dead for months. Day turned end-to-end.
A ‘one-sided nonorientable surface’ —
endurance where the easier band
fails. And not having thought of this
poet for some time, the idea of him
had already manifested in yet an earlier
conversation with another party
earlier today. In this six-coloured life
I have painted myself out of focus.

Cold is finally coming, it’s said.
Encircled by surreals, I feel close,
so close, too close. And I saw
a bloodied bird’s wing on a path.
And I looked for words instead
of numbers.