Correcting the record: a statement from inside Parnassus

Posted by Tracy, for John

I want to make clear that the idea of a "bombardment" of poems is offensive to my mind, and unsustainable as an anti-war gesture. The use of helicopters, and even the notion of a bombardment, relies on the very language and materials of wars themselves.

Second, having been misedited on the ABC's PM programme to sound as if I am in favour of Twitter: I was being ironic when I said it was a revolution in poetry -- it's only a revolution in electromagnetic invasiveness and damage. It was a long interview reduced to a decontextualised sound-bite.

Posted by Tracy for John

I am no nationalist.
I fly no flags.

The National(ist) and Regional Routes to Nuclear Catastrophe and Annihilation

Written by John, posted by Tracy


As India boasts of its joining the ICBM club, we read of half the world being in range and even the cry of Gandhi reconstituted. See this article...

This is aggressive posturing. A deterrent? Of what? Of doubts about the sustainability of a nationalising narcissism? If certain other countries gloated in such a way, they’d be annihilated by the ‘established’ imperial powers. But India has become a capitalist powerhouse, feeding the West what the West likes best (to rephrase poet John Forbes), and its new means of exploitation and aggression are buzzing at its fingertips.

As one who has spent time in India (or ‘Indias’ – despite the militaristic posturing of the central government, their actions do not represent the many spaces that make up ‘India’) on various occasions, who feels a strong empathy and respect for the many Indian cultures with which he has come into contact, and whose veganism twenty-seven years ago was triggered by a (non-religious) exposure to Jainism, I am appalled at the materialism and militarism that has been identified as ‘progress’. The ‘Brand India’ compliance with aggressive militaristic market capitalism reinforces the bigotries of caste and class, and does not alleviate them. The notion of joining an ‘elite club’ by having the ability to destroy (entirely) a vast distance from launch-site is truly a separation of cause and effect, an ability not to be held accountable for one’s actions. There is no post-colonialism, only co-opted and reinvested colonialisms. At the basis of all such endeavours is genocide. And those in India who have the lust for atomic weapons and ways of delivering them have joined the ranks of those wishing to inflict genociding colonialism. The word ‘deterrent’ is lost in the manufacture, launch, delivery and detonation of these weapons. It’s called ‘mass destruction’, a term we associate with Western propaganda but with a root cause that escapes the semantics, and it is cultural as much as anything else. Face up to it, people of the world. Face up to it, ‘India’. You are better than your military-capitalist State allows.

And once again I reiterate that Australia’s repulsive feeding of nuclear powers (military and non-military – not that there are ever many degrees of separation between these), is as culpable as the users of uranium (and one should note Australia’s own Lucas Heights research reactor here). It’s part of the cycle, and part of the planet’s doom. Nuclear is a one-way journey to catastrophe. The Barnett government in Western Australia has ‘given the green light’ (what an expression!) to uranium mining in that state, and the first mine is not far off starting. This should be resisted in every peaceful way possible. Add to the lead contamination and general destruction of ecologies that have ruined the lives of children and adults in Western Australia (while being sold as their salvation), and we have another nail in our coffin. A very big nail, very hard to pull back out once it is driven in. But never give in, never accept. Refuse!

Posted by Tracy Ryan at 3:18 AM No comments:

Note on Dust and Stow

Written by John, posted by Tracy


The edition of Stow’s poems I have edited -- The Land’s Meaning -- is due from Fremantle Press in a few weeks. I briefly discuss Stow’s poem 'Dust' in the intro, and am writing an essay on that poem in particular at the moment. The key really is found in Arthur Waley's note to his translation of Lao Tzu's Tao Te Ching, in which he says: 'Dust is the Taoist symbol for noise and fuss of everyday life.’ This is one starting point, as is the dust that lifts of the paddocks around Geraldton with the relentless driving winds so characteristic of that place.

John Kinsella
Posted by Tracy Ryan at 11:42 PM No comments:


I, like many other Australian schoolchildren of my era, had the song “Kookaburra Sits in the Old Gum Tree” rammed down my throat at school, camps, cub scouts and wherever else nationalism raised its ugly head. We had no choice in listening, and were usually forced to participate. Children were rarely offered the right of refusal, and were certainly paid no damages by the copyright holders when it was broadcast over the school loudspeakers during music period.

That a contemporary musician should have unconsciously played on that tune, then, would be little surprise (even if it were actually the case, which I don’t believe it was – it’s not a complex “riff”/motif and it could be individually generated many times in many places without degrees of separation... ‘ownership’ is always dubious). That tune was burned into the psyche, inflicting its damage, and maybe playing it out and reinventing it was a survival option. A kind of regeneration and reclaiming of the right to creativity and not imprisonment.

I don’t like the Men at Work song it attaches to, but I recognise the influence and effect it has had on many who associate it with something reassuring. I am not reassured by those things, but acknowledge that others are.

Copyright is frequently a brutal tool of the uncreative to profit from others. Too often dollar signs and not creativity are behind its application. Bringing trauma upon those who create music in the spirit of energy and enthusiasm for creativity (whether one likes the music or not), when confronted with the tools of capitalist greed (even though so many musicians pursue and embrace that very machinery themselves), is reprehensible.

Probably the most absurd application of copyright is that pertaining to the song “Happy Birthday to You”. You have to pay a royalty every time you perform/sing it in a public place? Piss off. No way. Not a song I like either, but having been saturated in it as a child, I feel I have the right to do as I will with it. I wish to reclaim the space it has claimed in my head. It has no rights over me; neither do corporate monsters who feed off our souls. And no one’s legacy should be ruined by the spectre of copyright and accusations of plagiarism driven by downright greed.

Posted by Tracy, for John

This one is simple: a no-bake (stove-top & fridge), veganised vanilla slice.
Ingredients:
Packet of plain square vegan crackers
(e.g. Jacob's cream crackers)
Vegan custard made up as follows:
4 tbsp custard powder (Bird's and Orgran are vegan and have no artificial colourings)
2 tbsp sugar
1 pint (about 568 ml) plant milk (I used soy).
(Basically it's an ordinary vegan custard but made with double measure of powder, so that it's thicker)
A cup or so of icing sugar. You can either mix it with passionfruit pulp & juice to the right, spreadable consistency, or use a little plant milk plus a drop of lemon extract -- something slightly tangy or acidic to offset the thickness of the filling.

Method:
Place one layer of crackers in the base of a deep-sided rectangular tray. You may have to bevel the corners to make them fit; you can see I also used some thinner strips at the edges. On a pyrex dish, I didn't need to grease the base. 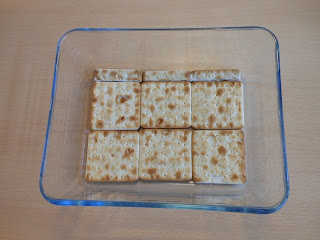 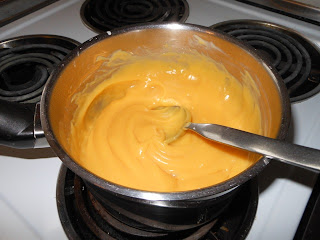 Make up your vegan custard to the thick consistency you see in the picture: 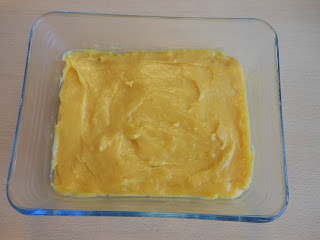 Spoon the custard as evenly as you can over the base. You have to act quickly or it will get too firm: 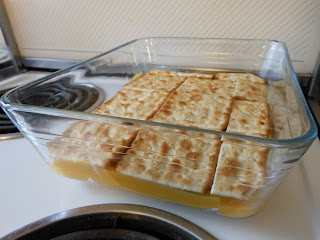 Place the next layer of crackers over the top of the custard and press down to get it as even as you can. It doesn't matter if your "paving" is slightly bumpy because these are the lines you will cut along to serve, anyway: 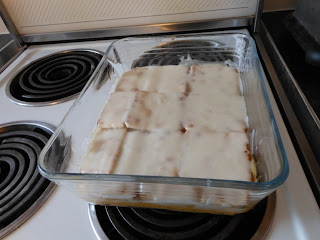 Quickly mix up your icing and spread it over the top layer of crackers. It doesn't matter if the icing is quite wet, as the crackers will soften by absorbing some of the moisture from below and above.


Place in fridge to set and chill. The longer you can leave it, the better the crackers will soften. Using the crackers is a lower-fat approach than using pastry (and no baking involved), and you virtually can't taste the difference.

Written by John, posted by Tracy
The Emperor of Ice-cream and his Cronies: the New Transportation

‘The only emperor is the emperor of ice-cream.’ Wallace Stevens

So...
You WILL be relocated to the mines of Western Australia.
You will ‘join’ the ‘boom’ (as John Forbes wrote: ‘even if we don’t choose to join you, we do’).
You will admit Perth to be the centre of the known Universe.
You will all bow down to the Emperor and his cronies.
You will eat the planet alive and shit it out on the cosmos.
You will consume consume consume.
You will buy off or crush those who oppose.
You will ‘negotiate’ with only one outcome possible: boom boom boom.
You will feed the Fukushimas and nuclear weapons industries.
You will allow him to enslave the unemployed and destroy families.
You will then allow him impose a ‘better’ version of (‘Christian’) family.
You will hear him on the airwaves praising ice-cream. It’s climatic.
You will ‘hear’ what you think you want to ‘hear’.
You will say okay, okay... boom boom boom.
You will attend theatre and opera weighed down with the cast-offs
from over-fed miners’ wardrobes – you, and the companies.
You will gloat and never get the irony of Lucky Country recidivus.
You will enjoy the lifestyle.
You will worship the Queen who is the Emperor’s rep in the Old World.
You will make haste to the mines.

Written in response to this article, and many others, pertaining to the right-wing corporate rule of Western Australia.