A few hours before lunar eclipse a couple of days ago... 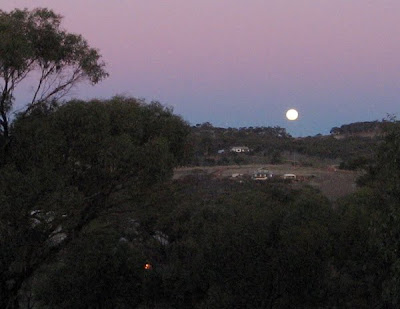 Posted by Tracy Ryan at 9:17 PM No comments:

By Tracy
Last week I heard novelist and musician Willy Vlautin talking on the radio from the Sydney Writers' Festival, and decided to try one of his books.
I wanted to partly because I get tired of novels limited to privileged or middle-class characters, and he's more interested in what reviewers keep calling "the dispossessed".
He's published three novels -- Planet Books only had two of them. I wasn't that interested in the new one, Lean on Pete, because of the horse-racing motif, so instead I chose his second, Northline (Faber and Faber, 2008).
It's a fast read. At first I found it quite annoying -- too much dialogue, phrasing too staccato for me, and the sense that the so-called "low-life" aspect is self-consciously on display for the reader. I couldn't tell if it was simply over-edited, stylistically, or if it was running on the assumption that people can only read very, very pared-back flat language. Some great writers of course have used a simple approach to style, but here it's frequently clunky, stilted.
Yet I kept reading, and it grew on me a little: there's a strong sense of compassion in the novel, and although it veers into being too sentimental (the Paul Newman fantasy-sequences, for one), it does leave you with a distinct feeling of atmosphere and some memorable characters.
Not the protagonist, however -- Allison -- who seems, perhaps intentionally, little more than an outline. It's the people who befriend her on her desperate downer -- like Penny, who trains her in phone sales, and Dan, a trauma survivor -- that seem vivid and durable creations.
The story is set in Las Vegas and Reno, among the drinkers, gamblers and workers of those places (Vlautin comes from Reno, according to the radio interview, though he now lives in Oregon).
He's singer-songwriter with the band Richmond-Fontaine, and there's a soundtrack for the book too.
All in all a bit disappointing -- certainly not the new Steinbeck or Carver that publicity led me to expect -- but still not a bad read.
Posted by Tracy Ryan at 8:42 PM No comments:

By Tracy
I recently finished Theodore Dreiser's monumental novel An American Tragedy (1925). I'm not the first by any means to notice its indebtedness to Stendhal's The Red and the Black, though the two novels are also extremely different. I was reading it as part of the "parvenu" or "upstart" thematic list I've set myself.
The protagonist (anti-hero rather than hero) is Clyde Griffiths, a young man raised in poverty and relative ignorance by well-meaning street preachers. Clyde has a longing for a better life in every material sense, and a sensual nature he has difficulty controlling.
Taken into employment at his rich uncle's factory, Clyde finds himself in a social no-man's-land: forbidden to mix with the women workers he supervises, but too lowly for acceptance among his uncle's set. Good-looking and sartorially-minded, he attracts the attention of wealthy young Sondra, but not before he has entangled himself -- compromisingly -- with Roberta, whom he now wishes to be rid of.
The story echoes Stendhal's only in its outlines -- the pride and social ambition realised through a woman's love and attentions, the abandonment of an earlier love -- the crime and trial and the question of capital punishment.
What's more, Dreiser took his plot from a real-life news item, as did Stendhal in his own time, so that both were to some degree fictionalising fact... although to say only that is to misrepresent the phenomenal fictional achievement of both authors.
Dreiser's novel is much less readable than Stendhal's. There were many passages I had to force myself to read simply because of over-telling. Dreiser seems to think he has to state something, then state it again, then re-examine for other ways of stating it. For a modern reader this is excruciating -- but it's not just a matter of being stylistically dated -- plenty of novels of similar age are more readable. It seems to be a deliberate stylistic choice, his own kind of realism.
Most credible critics seem to agree it's a masterpiece, but a flawed one.
Film-makers have made several attempts at it. The only one I've seen is George Stevens's A Place in the Sun (1951),

with Montgomery Clift in the lead role (character names are all different, and half the story is missing, but film adaptations have to do that sometimes). A very young Elizabeth Taylor plays the rich love interest, and Shelley Winters the cast-off working-class girlfriend. The film is highly watchable and very disturbing.
Posted by Tracy Ryan at 7:53 PM No comments: