Graphology Chronotype 21: Desecrations of Place by Pokemon Go and its Soldiers — a poem

Graphology Chronotype 21: Desecrations of Place by Pokemon Go and its Soldiers

The new colonialism
eliminates or integrates
the water’s edge. The Avon River
is replete and despite the chemical
run-off it can’t quite process,
birdlife is rife along its banks.

Perched in dying paperbarks
spoonbills eke out nesting plans,
and sacred ibises preen
themselves with optimism?
A problem with me using this term?
Really? Try the trampling-under

of birds and riparian vegetation
as the eye of the telephone
mediates the real world
into digestible auguries: and where
a rare white swan swings
its neck, a Pokemon perches,

scowling and grimacing.
Trodden under, this nature
of encounter, this exercise
routine to coax emergence
from the caves of gaming,
this tracking of each and every

cybernetic soul, this savvy
that marginalises non-participants
and swallows tales of capitalist
liberty with addicted gulps,
is a travesty of seeing. Too blunt?
Each step into privacy,

each sucking of another’s skin,
each moment of worship interrupted
and over-ridden, each threshold
crossed to gather location
to conquest, is the theft
of reality from non-participants,

all sucked into a vortex of deadlife.
The sacred ibises preen with optimism,
believing, along with spoonbills,
that they will nest and raise their young,
and see what they see with their own eyes.
Violation of geography, absorption of ‘outdoors’.

Posted by Tracy Ryan at 6:11 PM No comments:

Sweeney Encounters a Russian Adventurer in the Avon Valley: a poem by John Kinsella

Sweeney Encounters a Russian Adventurer in the Avon Valley

Sweeney had to do his shopping at Northam Coles.
There was a lot of kerfuffle in the town and more
than a few foreign voices. He was surprised

to find the foreigners were not being attacked
by locals. On his asking why, a teenager stacking shelves
told him, It’s because they’ll only be here for a while.

What was going on? Sweeney took to the airwaves.
Birds of a feather, we might interpolate. Just outside town
he came across a vast balloon being spread out and filled with night.

He swooped down and found a man who looked like
a heavily bearded Dennis Hopper. He caught the name
of this wild man whom he recognised as a holy obsessive.

Almost like me, he said. A Russian. There were many voices
speaking Russian. I know Russian, said Sweeney — I get pictures
wired to my headspace from a poet in his country dacha

every winter, every summer. It’s cold here in winter,
but not as cold as it gets in Russia. That’s the definition of cold
in overheated times. The balloon was filling and the zeal

of the adventurer was palpable. All of this just for him.
His name was Fedor Konyukhov. He was aiming to loop
the earth from sunrise. To smash a record. The media, cloying and clinging,

were saying he sees the world as a place to conquer: mountains,
oceans, everything. Sweeney could see vast swathes of mangroves
dying in the far side of the country but in his gondola Fedor Konyukhov

would fly nowhere near them. Sweeney watched the balloon rise
with the sun, hung around and did a couple of interviews, then flew back
to Coles to finish his shopping. I feel like the stork delivering my own birth,
he said, adding a few more cans to his stash.

A Call to Non-Violent Resistance: Save Wildlife NOW!

Too many of us know something is wrong, think it, even say it, but simply do nothing.

I am afraid the placebo of social media campaigns is as much as expression of hubris and vanity as it is a positive act of engagement with vital issues that require change or prevention. It’s simply not enough, and it ‘costs’.

The most positive example of the social media campaign for positive change is the online petition, and this has been used to great effect in Britain for all sorts of local and regional issues (though I don’t think they’d have any chance to halt the horror of racism and bigotry that has been ‘unleashed’ there in recent weeks).

But that, too, is reliant on officials and politicians feeling they have enough to gain from following it up, or, say, once introduced to parliament, that there’s the will to implement change on the various levels of bureaucracy. Government is inevitably self-serving and inevitably compelled by its (bottom) fiscal line. Compromise will always be made.

The so-called will of the people, which is usually measured by ‘numbers’ rather than consensus or even a default understanding or consideration of the needs of ‘minorities’, is a variable which officials and the so-called representatives of the people manipulate, and with which they play with at will.

A community does not have to be those who surround us who might hold, say, racist or violent views. Sometimes we have to step outside geography to make communal decisions and implement communal action.

Community might be those who are concerned, for example, about the health of the biosphere. They might hold many different views on many different things, but there’s general consensus on that primary and vital issue. And thus I bring this horrific issue to readers’ attention: 'Threatened species face extinction owing to "God clause", scientists say' (Calla Wahlquist, the Guardian).
This ‘God clause’, a coinage by Western Australian scientists in the context of legislation being debated in the Western Australian parliament, seeks to give the government and the minister for the environment the power essentially to exploit an ecology that might see the extinction of an endangered animal.

As is pointed out by those opposing this on the level of policy, to give rights for clearing land where an endangered species lives kills the creatures, regardless. Further, the qualification of which species should be able to live, and which will (through the actions of companies or individuals) perish, is not only speciesist, but literally an act akin to genocide in human terms.

That humans destroy on a massive scale is obvious; that humans feel remorse is evident yet paradoxical; but that humans would wish to legalise and legitimise their death-acts is so criminal it should be looked at as a form of war-crime. If one believes, as I do, that all creatures deserve the right to exist, this is one of the basest pieces of legislation ever placed in front of a governing body.

So what do we do? Social-media our angst and forget about it until the next piece of propaganda comes through from the Taylor Swift camp to keep us all distracted? No, we write more than a few lines; we write our lives into our opposition. We change our interactions with the state on every level so the state can no longer act in our names. We point out that even majorities can be tyrannies, and that no one can represent animals, and that even the most dedicated pro-animal campaigner will waver at the edges due to the pressures ‘of life’.

It has to be individual collective action. Let’s not allow this one to happen. As we watch more and more land-clearing of less and less native vegetation; as we all sit back stunned and let it happen, participating in the crime with our every consumer act on the planet, let’s pause, slow down at least one consumer ‘necessity’; let’s not leave it purely to advocate groups of ‘scientists’ or ‘prominent people’ or volunteer or paid members of environmental advocacy groups, but rather make our own decisions, communicate in real ways where we speak to people — not to avatars and numbers of followers. Speak individually, converse, dialogue, exchange.

This legislation is symptomatic of a greed so great, of an exploitation in what they are turning into an endgame, of a mass extinction made by the cronies of developers, miners, agricultural interests, and anyone who thinks they can make a buck to buy themselves better material goods, that it is much more than a local concern. It’s the hand that signs the paper. Its synecdoche reaches every part of the planet. It is the ultimate form of terror.

Don’t let hopping cridders the screen-
watchers don’t know much about
mess up a project. Buildings are life.

Don’t let fauna interfere with the molecular
integrity of construction — the guys who offer
to chop down to clear literally as you’re planting a tree.

Don’t let direct speech put you off the figurative —
there are still plenty of metaphors to hide behind,
long after the creatures are gone we can fantasize.

Don’t let the minister and the governor
scare you with their magic wands — they’ll
wave them over the earth with largesse. CEOs will cheer.

Don’t let any of this bother you watching
your favourite sport or watching your favourite
arts film. Think of what was done making Fitzcarraldo.

Don’t let someone with knowledge of land —
knowledge of what can’t be seen even with electronics —
distract you from your purpose. Your metals. Your living space.

Don’t let conjecture (bright light!) on how many
new species are left to be discovered upset your
ontological balance. There’s always the vacuum of space.

Don’t let me waste your valuable time for life
and all it can offer while the legislators sign off
on what doesn’t live on your clean, radiant screens.

Posted by Tracy Ryan at 8:23 PM No comments:

Four of my latest poems have just appeared in the Australian journal Eureka Street. The first one, "Sea Pinks", is about the flower (also called Thrift) that grows on rocks and cliff edges in the northern hemisphere, as in the photo below: 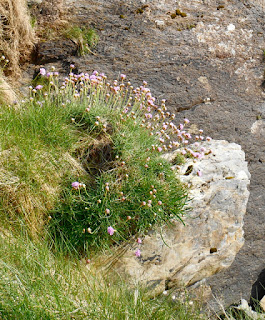 Their hardiness is impressive.

All four of the poems are in some way about survival and persistence, and for me the sea pinks embody this in a very direct fashion.

Posted by Tracy Ryan at 3:24 PM No comments: