I am three-quarters of the way through reading a new German crime title, Schreie im Nebel (lit. Screams or Cries in the Fog), by Tina Schlegel. It's her first crime novel, and is tagged as a "Bodensee Krimi" -- the Bodensee being what we call Lake Constance in English, and the novel's setting.

Apparently regional crime novels (Regionalkrimi or simply Regiokrimi) are big in Germany -- I happened on this one because it was newly out and available in my nearest bookshop. The Bodensee is in this region, so I thought it could be interesting.

Imagine my surprise on discovering that the main character, the detective Paul Sito, was a vegan.

I don't think I have ever come across a vegan protagonist in a novel before.

Not being a fan of novels about serial killing, especially when they're gory, I am nonetheless intrigued to see the way in which Schlegel has brought discourses about animal rights, violence and crime together in this story.

There's also the question of the way place is affected by the underlying (sometimes not so underlying) twentieth-century history of specific violence. Some aspects of this, though not with reference to Schlegel's book because it's just new, are addressed in the book of essays, Tatort Germany: The Curious Case of German-Language Crime Fiction, edited by Lynn M. Kutch and Todd Herzog.

Browsing through it, I discovered that Germany has a police-procedural crime fiction series that's been running since 1970 -- also called Tatort (which means "crime scene"). And I thought The Bill was long-running! The Bill, however, was largely focussed on one place, with only occasional forays elsewhere (as far as I ever saw) -- whereas the German series relies on regional difference in each story.

Vegan goulash with seitan and dumplings 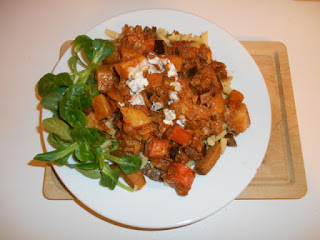 Here in this part of Germany, it's not difficult to find vegan items in ordinary shops, and there is a wide range of seitan-based foods, as well as veganised versions of traditional noodles, dumplings etc (that is, made without the egg that might be in the traditional ones).

There are lots of vegan goulash recipes on the internet, but I thought I'd add my variation. Goulash is originally Hungarian but there are variations on it all over Europe.

Everything in this recipe could be made vegan from scratch -- I used all fresh vegetables, but pre-made seitan, packet-mix dumplings and spätzle. (Maybe before leaving Germany I will have to get a spätzle-maker like the one on this page, because there won't be any pre-made.) Having both dumplings and spätzle is doubling up a bit, but it was very cold on the day I made it, and as a French mother once said to me long ago, in a European winter, il faut des calories... 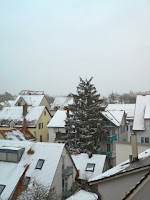 It's snowing again today, so that might be a good excuse for more vegan goulash.

For dumplings: I used packet mix, but you can make them from scratch if you have time and patience. Half-&-half dumplings use half pre-cooked potato and half raw -- they are then dropped gently into boiling water and simmered for 20-30 minutes. You could also try the Vegan Society's recipe.)

In our case: vegan spätzle to serve -- you could also use rice...

Sauté chopped onion in oil and spices (being careful not to burn spices), then add cubed eggplant till it cooks very soft. Next add in chopped tomatoes (very small pieces if keeping skins on) and mushroom. 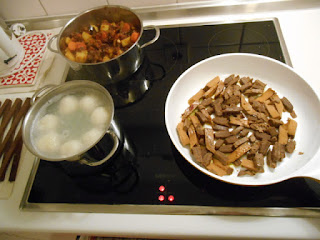 In a separate pan, fry the seitan to seal (it doesn't usually go mushy, but this makes sure it keeps texture) -- and add the spätzle when the seitan has browned. Dumplings simmering alongside, there. 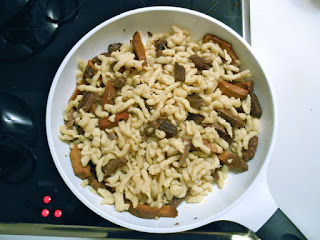 Just before the meal is ready to serve, squeeze fresh lemon juice into the goulash mixture, and stir through a little vegan cooking cream (or use thinly to garnish) -- if you want super-spicy, don't use too much vegan cream!

I put the seitan and spätzle onto the plate as a base, then topped with the goulash. 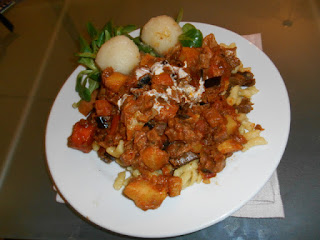 John doesn't usually blog reviews but I am going to, because I am so pleased to see a reviewer "get" what a book is about (or two books!).

Posted by Tracy Ryan at 8:53 PM No comments:

Don’t rely on another time of year.
It is now. Moss on the rough bark
of a wingnut tree says ‘north, north’
and the supplanted dead on their side

of the Ammer chew over the thirst of roots:
their sublingual gasp, their spread; suction.
All that has been drawn – materia medica –
from the graveyard-made-botanical-garden

is filed away somewhere in this town,
seedbank of the Green movement,
the left wing struggling to lift from
its muddy tomb, flash its bright feathers.

Posted by Tracy Ryan at 5:32 AM No comments:

A whole half-life has happened since you went.
Thirty-five years. Whose life was that? Mozart
had so much – it was more time than you got.
You stayed just long enough to reach “grown-up”
and that was it. It’s not about talent
wasted, or what you might have been: who gives
a shit about accomplishments? Not us,
not now. On the far side of the planet
from anything you saw or could have guessed,
looking up weather, I noticed the date
and thought of you. This is the way you ghost,
through numbers, intimations, other lives.
No Google search will ever turn you up
your relics are in hard copy, or lost.
Or in my poem. Thirty-five times round,
and I am sure I’m not alone to note
this, where you rise for an instant to cross
a scattered consciousness, then fall to rest.