By Tracy
Cruelty Free WA opened in Fremantle in late October.
They have all sorts of items, and everything is vegan.
Of course, you don't have to be vegan to shop there -- anyone looking for "humane" mousetraps (ones that enable you to move the mice without hurting them), or alternatives to leather, or toiletries and makeup that are not tested on animals and contain no animal products -- will find what they need here.
There's also a great range of chocolate, soy cheeses, sandwich slices, nutritional yeast (the best one, Engevita) and non-dairy cream too.
The shop is at 28A Queen Street, opposite the side of Myer that runs down to the multistorey car park (near where Queen Street meets High Street).
Posted by Tracy Ryan at 6:55 PM 6 comments:

By Tracy
Recently, local press featured objections to the destructive slashing (rather than pruning) of roadside vegetation, which we had also noticed on the way to Toodyay.
John's just been up in the Central West & I thought I'd transcribe here some observations from his journal that show this problem is not simply confined to the Avon Valley...
Coming down from Geraldton today I was deeply disturbed to find that a slashing machine had removed most of the vegetation on both sides of the road from about 30ks out of Mingenew through to Coorow. Irony of all ironies: it roughly starts at the sign that says "You are entering wildflower country" (or something along those lines). There are no wildflowers, because there is no vegetation! A quarter of a century ago, I worked on the wheatbins at Mingenew for one and a bit seasons, and when I left (or escaped) there after that "bit" of a second season, I hid in vegetation to elude my persecutors. Couldn't have done so these days -- that area of roadside bush has been reduced to small piles of wood-fibre!
There has been controversy recently in this area (around the Avon Valley), due to the Northam shire using a slashing/mulching machine on a local road, ruthlessly destroying trees and scrub. But as others have said, various shires have been doing so all through the wheatbelt and for a few years. It is brutal and horrific. I wrote a poem about this, about 16 months ago -- it was published in a lit. journal somewhere but I don't recall where. It's entitled "Hyperbole".
I (Tracy) will add in the poem below for those who might be interested.
Hyperbole

Patois of the shredder,
shoddy skinner, demi-
pruner of roadside vegetation.
Poète engagé, ha! I pursue data,
inform my protest,
wrest lyrics from the brutal,
but the name of this rotator,
psychopathic cutter,
is hidden, encoded.

Travelling, I have caught
its progress, high-pitched
whirring, nerve destroyer,
too often — a seasonal
assignation, slasher
moment from which
the ghost-self emerges
tattered as living
and dead flesh mixed.

Truth is, I know
the operators, know
the work they crave: a call,
a few hours, a shire
pay-cheque. Just enough.
'Today we flayed the garden.
At smoko we ribbed and jibed,
exaggerated the assets
of celebrities.

Mostly, that cutting whirr.
Mostly, the screeching banshee.
Mostly, the screaming ab-dabs
this machine induces.
Short-tempered
with the kids.' I hear
this — it is said among friends.
For their sakes, also,
I protest, poète engagé, ha!

Posted by Tracy Ryan at 1:30 PM No comments:

By Tracy
No photo this time, because I was taken unawares:
I just now walked out to put some material in the recycling bin, and two feet in front of me, on our verandah, was a huge gwardar (western brown snake).
My heart is still thumping. It was beautiful, but the size of it was overwhelming, and the fact that it was just outside the front door. If you've never met one, you can read about this lovely but dangerous creature here.
It swished along the line where the wall meets the floor and disappeared behind the recycling bin.
(W. said when she opened the front door this morning, a big bungarra was sitting there! Two close encounters in one morning. The bungarra, however, is not venomous.)
It reminds me how visibly cyclical our life is here -- last November we had similar encounters.
Posted by Tracy Ryan at 1:31 AM No comments: 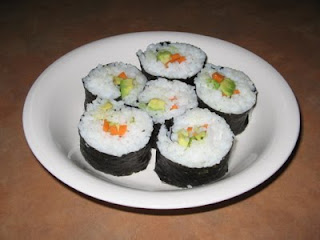 The centre filling in this case is avocado and carrot, for colour as well as taste.
I didn't have a sushi mat for rolling, so these are a little looser than they should be, but they still held together, and still tasted good.
Posted by Tracy Ryan at 9:52 PM 1 comment:

Two views from the Shriver universe...

By Tracy
Lionel Shriver's Game Control was a birthday present for me this year. It's a distressing and difficult novel to read -- not difficult in language or plot, more because she treads (as always) fine lines in what she depicts -- the reader continually winces.
This is (according to her afterword) the book that lost Shriver her American publisher. (It was subsequently taken up in Britain and then saw US publication after the big success of Kevin.)
I can see why. I'm very ambivalent toward her work -- but then Shriver is a master (mistress doesn't sound quite right!) of ambivalence herself. No novel more built from dialogue, in terms of competing voices and viewpoints, and here frustratingly so, because so polarised. You want to scream at the book that ways of seeing don't have to come in those specific, watertight packages (to mix metaphors somewhat).
It's a book I'm forcing myself to continue reading, rather than one I'm drawn into.
As always, Shriver writes with such pervasive irony that you will rarely if ever pin any particular character's view on the author. But I thought this pair of quotes quite telling. It's a "talky" novel, rather than a "happening" one, which gets annoying after a while...
From the character Threadgill, to another character, Piper:
"...for some reason everything we have and everything we make is gradually taken away from us. Your life is a leaky vessel; no matter how much you pour, your cup will never overflow, because there is a hole in it. The universe has a hole in it.  Your lovers die or betray you; your professional successes are diluted by failure or by simply being past; the summer homes where you spent the idyllic holidays of your childhood are bought by strangers and painted a garish green. So you can never stop making; maybe that's the reason for the hole. I don't know where these things go; I don't believe they vanish. I wonder if there isn't a magnificent junkheap in the next dimension of favourite train sets before they were broken and golden afternoons before the last terrible thing was said that parted two friends for ever. Whyever, the hole is there. It will suck from you everything you love." (pp. 168-9)
And a few pages later, from the viewpoint of Eleanor, if not in her direct speech:
"Cynics are spoiled romantics. They are always the ones who had the highest expectations at the start. They were once so naive themselves that they despise naivety more than any other quality. Alchemists, they turn grief to gold. They take quinine in their tonic, Campari with their soda -- bitterness is an acquired taste. Cynics have learned to drink poison and like it. They are resourceful people, though the sad thing is, they know what's happened to them. They remember what they wanted to be when they grew up, and not a single one of them dreamt of becoming a cynic." (pp. 172-3)
Food for thought, if a little trite -- but it's the constant clash of these (among other) viewpoints -- especially those of the two main characters, whom Shriver calls "vengeful misanthrope Calvin Piper and... guilty do-gooder Eleanor Merritt" that drives the novel.
Posted by Tracy Ryan at 8:56 PM 1 comment:

By Tracy
Today I've switched the blog posting over to my own management, as John is stepping offline... (see earlier entry here.)
(He's still here in spirit, though -- and in person nearby, of course!)
In fact he has a new book out -- a novel or rather récit -- entitled Post-colonial, which you can read about (and buy, if you like) from Papertiger.
Posted by Tracy Ryan at 4:01 PM 1 comment: 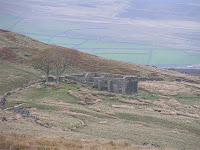 ITV’s new two-part television adaptation of Wuthering Heights finished screening here last night, and was worth a look, if inevitably disappointing in some aspects.

I wonder how it would have been understood by anyone who (a) hadn’t read the novel, and (b) hadn’t seen the first half, the previous week, because toward the end, the second episode jumped suddenly back to the “present” frame of the narration, without warning or explanation, using merely the churchyard scene we connect with the first Cathy’s death, to leap to the second Cathy’s marriage to Linton Heathcliff.

But technicalities like that aside (the novel is complex in terms of narrative framing and temporal shifts; so was this adaptation, though differently) what struck me most was the reinterpretation of Heathcliff in this production.

Tom Hardy was superb in the role, midway between the overly pretty Heathcliffs we’ve seen in the past and the grotesquely thuggish ones – he has perfected the kind of glazed stare that conveys barely controlled violence in a character, or intense emotion; there was no question of his believability in the role, as there has been for me with other actors attempting Heathcliff.

But the character seemed to me greatly softened by the script – perhaps in the belief that modern viewers could not tolerate the Brontë original. This Heathcliff, for instance, does not dispose brutally of Isabella Linton’s little dog upon eloping with her; he even tells Isabella he has “tried” to love her but could not, as if their elopement were not all along part of his plan for revenge.

We also lose Cathy’s full and astonishing speech about him not being a “rough diamond” (though many of the other striking speeches from the original text found their way in, even if necessarily recast in other dramatic moments).

Isabella herself was not shown to be the utter ninny of Brontë’s text but perhaps merely an overly romantic silly girl who pays the price of her infatuation (some of this has to happen; she becomes more dispensable, more background, without the contribution of her letter-narration, and understandably so given the time-constraints of television).

But Heathcliff softer? (More like Gordon Brown?!?) More believable this way, that Cathy (or anyone) would love him? Maybe it had to be so; yet it was apparently acceptable to show him near-strangling Hindley Earnshaw, with the clear suggestion of loss of control through grief, rather than from any vengeful wickedness.

A whole generation (if any bothered to watch it to avoid reading the novel, a common-enough student ploy!) will now perhaps make the mistake on their exams or essays of laying a gun beside Heathcliff’s head on his blood-smeared deathbed. I suppose the sound of gunshot was an effective dramatic device to bring the other characters running to discover H’s death – as well as according him a more active, decisive and “masculine” role in his own death (as opposed to seeming purely to will himself to death, as in the novel).

No adaptation completely satisfies everyone – and of course narratives must alter in the transition from page to screen, or into any other medium, for that matter. But it’s still interesting to ponder the “other” changes that slip in at the same time, that are less to do with medium than with contemporary attitudes, moral and otherwise, and criteria for credibility.

[For more detail on the changes made between the novel and this version, there's a good blog entry on it here]
Posted by Mutually Said: Poets Vegan Anarchist Pacifist at 5:03 AM 2 comments: