Seitan* is wheat protein, malleable and versatile – you can slice and fry or grill it, cut into chunks or cubes and add anywhere you would add other proteins – with pasta or in curries. We like it in browned slices with mashed potato, vegan gravy (Massel does a vegan gravy powder, for example) and veggies.

It's made up from a dried protein staple (gluten flour) that will keep for ages in the cupboard. It's simple to prepare, as long as you have at least an hour before you want to use it.

You need: gluten flour (try the breadmaking section of your supermarket), plain wheat flour, water, veggie stock/soy sauce for simmering, and any condiments you want to flavour it. (I used a third of a cup of nutritional yeast, added to dry ingredients before mixing; you can also add onion powder or any spices you like.)

You need a large pasta-type pot or big saucepan, which you’ll fill with 4-5 litres of water, adding the veggie stock and/or soy sauce, and bring to the boil.

Stir together two cups gluten flour to one cup plain flour in a large bowl. Quickly add just over a cup of water, and turn till it forms a ball of dough (not too sticky, or you won’t be able to get it off your hands!). 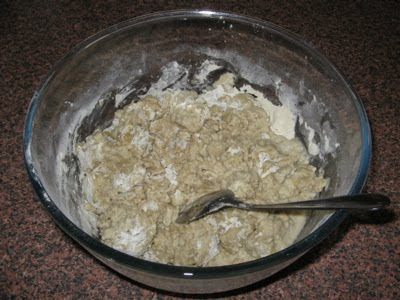 Turn out on a lightly floured surface and knead to remove air bubbles or any pockets of still-dry flour. 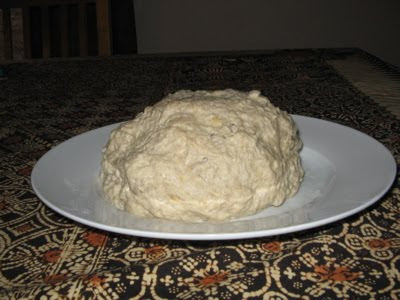 Divide into three or four chunks. When your stock has come up to the boil, add the chunks and turn down to simmer (lightly bubbling will do) for one hour. 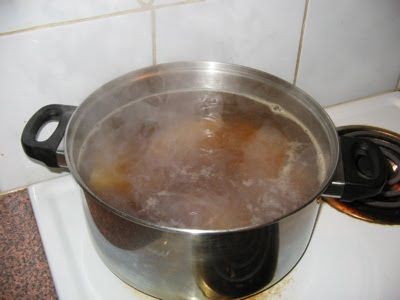 Don’t add the chunks before the stock has reached the boil, or they will turn out too fluffy and porous.

Once cooked, drained and cooled, the gluten will have a firm, sliceable texture. 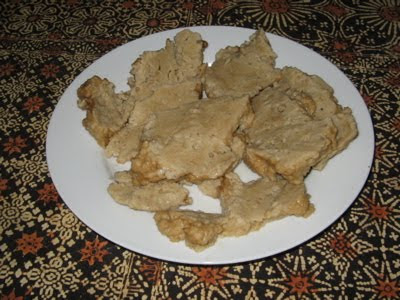 The best seitan/gluten dish I’ve ever tried is the roast on Beverley the Vegan Chef’s site. It takes a little more preparation than the simmered style, but is well worth it.

(*Seitan is one name given to one style of gluten; my recipe is a rough approximation of the idea.)
Posted by Tracy Ryan at 4:05 PM No comments:

Tim's had a sore throat, and so requested this smooth and soft pudding which he loves at any time... 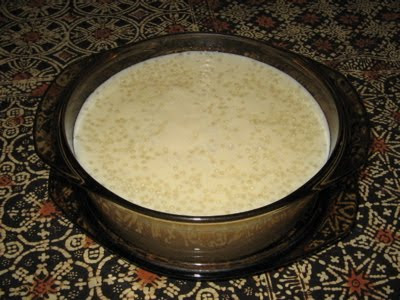 Soak the dry tapioca in the soy milk for an hour or more.

Add vanilla essence. Bring mixture gently to the boil. (If it's too fast, the mixture will catch and burn on the bottom of the saucepan.)

Simmer till the tapioca looks clear, or mostly clear. (If the tapioca is still opaque, it will be hard and gritty.)

Remove and stir the sugar through it, then pour into bowl.

You can eat this hot (runny) or let it chill (sets into a jelly-like texture).

There are lots of other things you can do with tapioca (and sago) but this is one very simple vegan option. Serve alone, or with soy icecream, vegan cream, fruit, coconut cream... etc.
Posted by Tracy Ryan at 6:04 PM 1 comment:

The West Australian reported a few days ago that according to WWF Australia, over the past eight years, bushland "has been cleared around Perth at an average rate of 10 WACA stadiums a week". (6812 ha of bush between 2001 and 2009.)

You can read the full article here. It's already very obvious just from looking around -- so many housing developments where bush used to be -- but it's still devastating to read such a confirmation.
Posted by Tracy Ryan at 5:10 PM No comments:

I made this today to welcome in John and John A. who were cutting the grass all day, to get it down before deadline (fire safety). 6 steep acres with many large and small rocks. It's mostly wild oats, with some wild barley (apparently harder to cut than the oats).

Anyway, because the cake turned out a little lopsided, Tim and I had to sample it first to make it look more symmetrical... 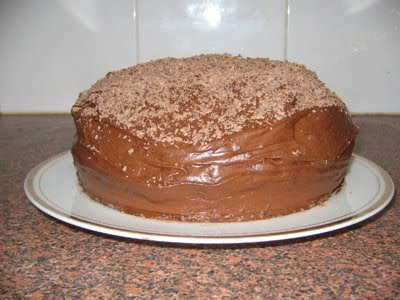 Sift flour, sugar and cocoa into large bowl. Mix egg replacer with the water till fluffy, add to bowl; add oil and vanilla essence, and use beater to add soy milk little by little until the consistency is of a good thick batter.

Pour into greased (Nuttelexed!) and floured cake tin, bake at 180 deg C for 45-50 min, depending on your oven.

Sift icing sugar and cocoa into bowl, fold together briefly. Add the Nuttelex, and little by little add small amounts of soy (very little) as you beat (electric beater does this more easily). If you're too hasty or heavy with the soy milk, the icing will be runny.

To make up: Halve cake horizontally with large knife; fill with half icing and put halves together, then ice the outside. While the icing is still unset, you can grate vegan chocolate over it as I did this time.
Posted by Tracy Ryan at 5:01 PM No comments:

The Herald this weekend has a rare article on veganism (albeit not quite, since the featured author cooks vegan some of the time but is not actually vegan).

Still, it's not often it even gets a mention, and a fairly positive one.
Posted by Tracy Ryan at 11:38 AM No comments:

This was a birthday gift, nothing to do with my studies, except of course that it's a novel -- so I read it for pleasure.

It's a quiet novel whose atmosphere certainly drew me in, though I was disappointed that the back-cover blurb tells practically the whole plot (such plot as there is -- this is a mood-driven and character-driven book).

Middle-aged Mohan, a letter-writer, lives in reasonable comfort and calm with his wife Lakshmi in Bombay/Mumbai. They are at that stage where children have left home and an uneasy distance has crept up between husband and wife, though it takes a while for Mohan to realise this.

Their nephew Ashish comes to live with them because though his parents have moved away on account of work, Ashish must repeat his final year of college because of under-attendance.

Ashish has his own emotional (and sexual) life unknown to his uncle and aunt; the novel moves between his story and that of his uncle's marriage and daily life.

The writing is poised and observant, the characters credible -- and for a first novel, it's quite subtle and sophisticated in approach.

If you don't like very slow-paced or middle-class-style fiction, it won't be your thing. Ignore the back cover if you want to make the most of its developments...

The UK's Telegraph listed Anjali Joseph as one of their "20 best novelists under 40", for what that kind of list is worth.
Posted by Tracy Ryan at 7:26 PM No comments: