The bush is being torn away as I write. It's a scene of horror. Hundreds of people doing their best to stop it. Three new poems.

Failure in-situ — what can be written
as butcher birds clarify the rise and fall
and fall and fall? The Coolbellup woodlands
where zamia palms spike your conscience
on the path — those trees would be good
to inhabit, to ward off the bulldozers,
the employees of the contractors,
prepped to counter protests
shallow in their psyches — jobs to do.

Failure in-situ — what can be written
as the police encircle, ring the wagons,
protect the destroyers? Chat with them,
find the flaws, or treat them as alien.
Either way, either way. As organisation
fragments in the empty shadows, in the vast
cavity of drill and scour, the root canal
of hate. Glib as the wattlebird scurrying
into the dusty air, the fun-fair tree falling away.

Failure in-situ — what can be written
as wound widens, as lexical fluctuations
upset even the certainties of horror? New
inflections in the oldest concept, the oldest
truth of all. The horror spreads and on the outer
we wonder at the silence, to circumnavigate
and find the organs of the body stripped out,
this cannibalism which is celebrated as ‘progress.’
The realm of apocalyptic literature grows.

Accounts — to the Premier of Western Australia

I hold you accountable for the trauma our thirteen-year-old
is going through as habitat for the birds he loves is destroyed.

I hold you accountable for the emphysema of the biosphere,
that gasp you add to our last gasps, deoxygenated, stranded by the road.

I hold you accountable for the zoo of death, for the ark scuttled
and going down with all hands on board, for survivors shot on the surface.

I hold you accountable for helping boil the planet in its own oil,
for encasing it in bitumen dredged from the pits of hell.

I hold you accountable for making science a convenience store
in which well-fed bullies stuff their baskets without paying.

I hold you accountable for cruelty and torture, for casualties
you don’t acknowledge, for ignoring alternatives to feed your vanity.

I hold you accountable for treating life as a game in which winner
takes all, a psychology of childhood instilled by abusive adults.

A Failure of Empathy

In the tragi-comedy of streets,
the Shakespearean momentum
of anniversary, police approach
a child carrying a sign that asks
what’s to become of his future.
In silence, he stands, facing
contractors and police,
and all is in that moment,
the bush falling to the blade,
the police ready to counter
any threat.

John Kinsella
Posted by Tracy Ryan at 12:50 PM No comments:

Bulldozing has begun, but resistance continues 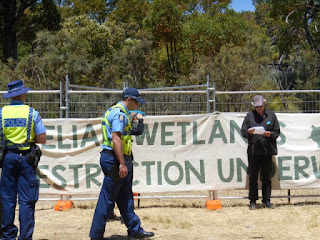 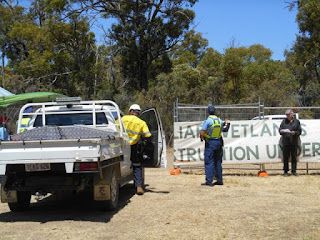 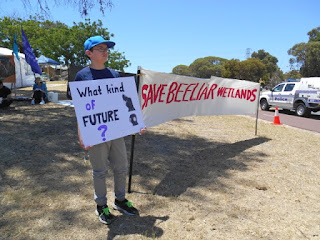 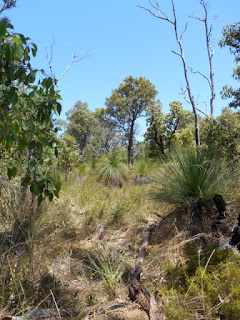 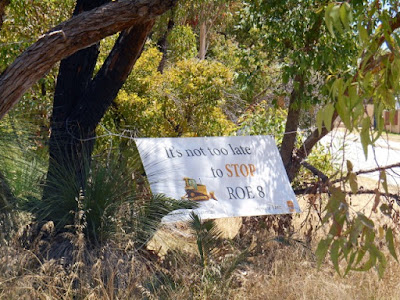 Posted by Tracy Ryan at 9:26 PM No comments:


I want to make clear that I do not advocate anyone putting themselves in harm's way when confronting bulldozers and other vegetation-clearing equipment.

If I make a personal choice to do so, in any given situation, at any given time, then I do it alone and expect no others to follow my example (in words or deed).

For me, that's a carefully thought out position when all other means have failed. I do not advocate any form of violent resistance.

I do believe I have the right to place myself between natural habitat which is under assault, and the machines being used to facilitate the assault.

I think the most effective approach is to 'talk' or 'sing' to the machines, so to speak — that is, to voice as one the opposition (poetry is effective) so that it is heard by all, confronting the machines, their drivers, and those who wield the power behind them (those so often faceless cowards who send the 'troops' in to do the dirty work).

Below is a poem, written in the context of the Beeliar Wetlands situation, which I believe could be effective 'sung' or spoken 'to' the bulldozers and those behind them, and also to all the 'undecided' or indifferent people who so often unwittingly contribute to the scenario of destruction.

So, please DO NOT ever put yourself at physical risk, but always stand united against this assault against the rights of the environment and, indeed, assault against human rights in so many different ways. We can act in peace and also respect ourselves in doing so.

tear the earth’s skin — from earth they came.
Bulldozers are made by people who also want new
mobile phones to play games on, and to feed families.

Bulldozers are observers of phenomena — decisions
are taken out of their hands. They are full of perceptions.
They will hear our pleas and struggle against their masters.

writing in front of its face. Bulldozers are vigorous
percussionists, sounding the snap and boom of hollows
caving in, feathers of the cockatoos a whisper in the roar.

Bulldozers deny the existence of Aether, though they know
deep down in their pistons, deep in their levers, that all
is spheres and heavens and voices of ancestors worry

O S and U blades, each to his orders, his skillset. Communal
as D9 Dozers (whose buckets uplift to asteroids waiting
to be quarried). O bulldozer! your history! O those Holt tractors

working the paddocks, O the first slow tanks crushing
the battlefield. The interconnectedness of Being. Philosopher!
O your Makers — Cummings and Caterpillar — O great Cat

we grew up in their thrall whether we knew it or not — playing
sports where the woodlands grew, where you rode in after
the great trees had been removed. You innovate and flatten.

We must know your worldliness — working with companies
to make a world of endless horizons. It’s a team effort, excoriating
an eco-system. Not even you can tackle an old-growth tall tree alone.

But we know your power, your pedigree, your sheer bloody
mindedness. Sorry, forgive us, we should keep this civil, O dozer!
In you is a cosmology — we have yelled the names of bandicoots

and possums, of kangaroos and echidnas, of honeyeaters
and the day-sleeping tawny frogmouth you kill in its silence.
And now we stand before you, supplicant and yet resistant,

asking you to hear us over your war-cry, over your work
ethic being played for all it’s worth. Hear us, hear me —
don’t laugh at our bathos, take us seriously, forgive

our inarticulateness, our scrabbling for words as you crush
us, the world as we know it, the hands that fed you, that made you.
Listen not to those officials who have taken advantage

of their position, who have turned their offices to hate
the world and smile, kissing the tiny hands of babies
that you can barely hear as your engines roar with power.

But you don’t see the exquisite colour of the world, bulldozer —
green is your irritant. We understand, bulldozer, we do —
it is fear that compels you, rippling through eternity,
embracing the inorganics of modernity.

Posted by Tracy Ryan at 8:23 PM No comments:

In memory of Ms Dhu, and for her family

These poems were written in January 2016, at the request of the Deaths in Custody Watch Committee, to support a campaign for awareness about the death of Ms Dhu in police custody in South Hedland in August 2014.

The poems are posted here with permission from Aunty Carol Roe, via Ethan Blue.

Today the coroner has handed down her findings and recommendations. She stated that MS Dhu received "inhumane treatment" from the police concerned, and that her death was preventable.

According to one news source, the coroner

"found the conduct of the medical staff and police officers involved was well below the standards expected".


While it's clear to anyone reading the coroner's findings just what level of neglect and indifference prevented Ms Dhu receiving the care to which she was entitled, we are baffled as to the unaccountability of police (and medical staff) in this case.

The Guardian reports that a Senior Constable was

"issued an assistant commissioner's warning notice after an internal police investigation for the 'lack of urgency' she showed after Dhu hit her head, and 10 other officers were given disciplinary notices for failing to correctly follow lockup procedure. Most told the inquest they did not understand the notice and did not know why they had been disciplined."


How long can this sort of inhumanity toward Aboriginal people go on?

In reproducing the following two poems, we wish to express our heartfelt support for Ms Dhu's family and our desire to see justice for Ms Dhu's memory.

A daughter begins so small but soon
outgrows her mother

bigger than love can keep hold of

Out in the world, the future

Yet to a mother,
a grandmother,
a father, she’s forever
–  some part of her –
that little slip they watched over

We want respect for her

Not the cold shoulder, the sneer
the hard voice out of nowhere
that says Faking it

Not the indifferent she’ll-be-right, the failure
to listen when someone says pain

is ten out of ten, what can it mean
if she’s treated like nobody’s daughter?

What sort of blight are we under?

In Marapikurrinya: for Ms Dhu

The uniforms won’t listen, ore heaped up,
long steel ships waiting to take country
away. They refuse to see themselves,
boots and all, march away

from all spirits. They laugh at body,
they laugh at words, but they
have no idea they are dead-in-themselves,
their faces dressed up for the cameras.

They kill with impunity. They are designed
that way. In another lock-up, I have
seen the body of a young Noongah bloke
tossed like a hessian sack, his bones

all busted, and the ring-a-ring-a-rosie
circle laughing and saying you deserve
what you get. The uniforms denied he was
in there, inside his own body. The sounds

that crept out were television – they all watched
American cop shows. It’s all there for them –
the land dressed up as state or nation:
they fancy their long arms reaching out,

they fancy their long arms reaching
across tribal boundaries, heaping it all
into the belly of those long ships
or into trucks or train. To furnaces.

Stretching fences across stone and sand
and far into sea? Their magnificent
jurisdiction of brutality. They are their
own totems. They worship their ‘order’.

I know that port. I have been in a house
where Nyangumarta and Yamaji
came together listening to Coloured Stone
and Sonny Terry and Brownie McGhee.

And stories were told then, back
then, as the death-toll rises and those
hunting parties of the Old North
find their latest manifestation.

This reaches out to you, Ms Dhu,
and to all those from past and present
who hold you close, who won’t see
you lost in the files of the ‘deceased’.

You will outlive them all.
You will hold back the uniforms
from striking more and more of your people down.
You will be the beginning. You will never end.

Posted by Tracy Ryan at 2:57 PM No comments: