Destruction of Native Vegetation and Habitats on a Vast Scale

Below is an extract from the activist poetry journal I have been keeping for thirty-five years.

At a time when what is left of Australia's natural environment is under serious threat, or is literally being demolished, I feel a need to bring to people's attention the fact that this assault is on a massive scale and happening everywhere.

The Western Australian Main Roads Department and private contractors are clearing old-growth trees on roadside reserves at a horrendous rate, and there is little or no protest. And when there is, objections are met with silence.

The removal of old-growth trees along the York-Quairading Road is happening right now — dozens and dozens of massive salmon gums, wandoo trees, and York gums. The front page of the most recent York & Districts Community Matters confronts this situation. The mass clearing of roadside vegetation between Southern Cross and Kalgoorlie along the Great Eastern Highway is happening apparently without scrutiny or protest (though thousands of people drive past these clearings daily).

What's happening at Beeliar is an expression writ large of the contempt in which officials and companies hold the natural environment. This is closely connected to the interface between capitalist exploitation and the rise of global fascism. In Western Australia, as elsewhere, the Environmental Protection Agency and other such bodies are increasingly becoming a rubber stamp for business and rapacious governments.

I have just written to the CEO of Goomalling Shire regarding the intention to clear old-growth wandoos and salmon gums (well over a hundred years old with nesting hollows) from along the edge of the Wongamine Nature Reserve on the Nunile-Bejoording Road. Another local government outrage, indifference, insensitivity and maliciousness as an extension of the state’s and federal government’s machinery of environmental destruction as policy. Further, the bauxite miners are back and staking new claims through the Avon Valley, aiming to delete jarrah and marri forest to create open-cut mines. As the Toodyay Herald reports (October 2016, article by Brian Dale from the Avon Hills Mining Awareness Group): ‘It seems not a month goes by without the announcement of a new mining tenement in the Avon region.’

The bauxite miners are trying new angles on new zones in their effort to consume the remaining forest to make more window frames, planes, bits of cars, etc. This latest abomination even includes the Inkpen Nature Reserve. All voices of opposition — feet on the ground, literary, artistic, traditional owners (so often neglected and ignored in these conversations), social and cultural disobedience need to be focussed on preventing this cascading colonisation.

I wrote to the CEO of Goomalling Shire this evening:

I would like to add my voice to the deep concern being expressed over the removal of old-growth trees on the Bejoording Road in Nunile. I (and my family) know these trees very well, and they are essential to the health of the ecosystem in the region. There are few enough of such trees left, and the removal of these will have a long-term detrimental effect on bird-life and the environment in general. I beg you to change your plans for the road before it's too late. I am willing to assist in any way I can for this conservation aim.  Thanks.

No reply from the Shire of Goomalling re my letter. Will head out to the old-growth trees at Nunile later today and see what the situation is. Take photographs (or Tracy will). First stage of protest is the letter, second takes place in situ. Problem with trying to campaign for this is that it’s relatively ‘isolated’, and ‘lone’ action can leave one vulnerable to violence with little chance of success. When my brother and I were protesting old-growth karri logging in the southwest thirty-years ago, we were actually hunted down and shot at and took refuge overnight in the forest.

The Toodyay Naturalists’ Club are very angry about the situation and I will make contact/liaise with them if I can. Community is necessary in such actions. Can poems work this late in the piece? I will try.

I have written to the Toodyay Naturalists’ Club. All avenues with this one!

HORROR!!! ... The Shire of Goomalling have already chopped down those old-growth trees. We went to look at them this afternoon to work out an approach to help save them and the Shire had done the filthy deed. Tracy has taken dozens of photographs to document it. There’s almost nothing like these trees left in the area now. 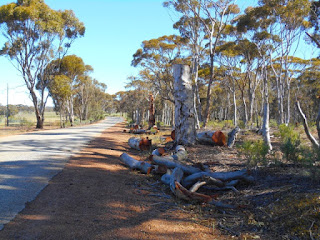 And as we lamented, a pink-and-grey galah appeared out of the hollow of one of the remaining trees in the ‘background’, looking down at us and the wreckage of its habitat. 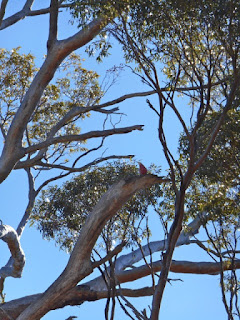 There is actually a vast space on the east side of the road that could have been used by the shire in their road widening, but no, they went for the trees where over the years Carnaby's cockatoos have nested. This MUST stand as a test case against such butchery. ENOUGH IS ENOUGH!!!

Letter to the Shire of Goomalling:

I am shocked and horrified to see the trees have already been chopped down. This is an outrage. This should not have been allowed to happen! I will be speaking loud and wide about this disgrace. It is an ecological crime.

Swapping emails with The Toodyay Naturalists people. Sounds like something very malicious and calculated was behind this clearing of old-growth trees. The Naturalists’ Club is outraged and also want it to become a ‘test-case’ to prevent it ever happening again. It turns out that the area cleared wasn’t even part of Goomalling Shire, but actually part of Toodyay Shire.

And today the WA Government has said Roe 8 will go ahead through the vital Beeliar Wetlands despite a High Court challenge looking likely. Country is being eaten, eaten, eaten!

More: The Shire’s media release about the clearing (Feb, 2016) did not go to the people concerned about such issues and, what’s more, was released by Goomalling and not Toodyay (shire) where this ecological crime has been committed. And as for their ‘advisor’s’ comments that the Carnaby nesting hollow wasn’t in use, how ridiculous — Carnaby’s cockatoos return to hollows at intervals over many years. These old-growth wandoos and old-growth salmon gums are increasingly rare with the wholesale clearing of the wheatbelt (Goomalling only has 4.6 percent of its natural vegetation left according to the Naturalists’ Club in the Toodyay Herald, October, 2016). Cleared cleared cleared! That’s the only use poetic repetition should be put to — to illustrate grief, anger and to imprint itself on conscience. 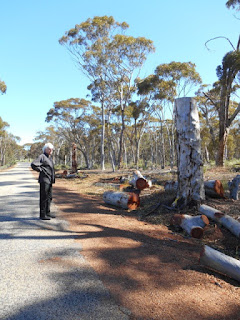 The fall of nesting
hollows is to unleash voids
that cannot be filled.

Living stumps remain
after the chainsawing is done —
slices of trunks, limbs

Those living stumps will
be uprooted very soon —
erased. ‘Approval’.

Yellow crosses still
mark their bases — a yellow
that burns the psyche.
Form is of no use unless
it reconstitutes the flesh.

What use are the ‘rules’ of prosody in the face of such horror? What can poetry do? Language must break out of the constraints and restraints of the poem. Not become a set of shire minutes. I have sent this poem to Kwame as part ’45.’ of our collaboration: it’s a space in which I can work out activist approaches, as he also deals with the hells of hatred, the murdering of black men and women by the police forces of the United States.

Another environmental outrage here, Kwame.
A neighbouring shire has manipulated a boundary

and cleared old-growth trees from the edge
of a nature reserve. I had been going into campaign

mode to try and stop them. We went out to visit
these old wandoos and salmon gums -- vital

nesting trees as it takes over a century of growth
and work by fire and termites, fungi and storms,

by all the natural acts of existence, for suitable
hollows to form in limbs and trunks, places

where cockatoos and parrots can lay eggs,
rear their chicks. Fewer and fewer of such

trees are left, as the land is ravaged by farmers
and developers and miners greedy for every

foothold, we must ensure that on the edges
and in the niches, these habitats persist.

trees’ corpses, and a lone pink-and-grey
galah looking on from a remaining

nesting hollow in a nearby tree:
it imprints deep. Even the sunset

is bereft. But I've no room for metaphor --
it feels tainted, it feels like insult to injury, to death.

Over the years I have noticed that some activists can be disturbingly territorial about their ‘causes’ and campaigns. They wish to advocate in their ways, and through their controls. One offers to help and it’s ignored; or, say, when I was trying to save bushland and watercourses near Walwalinj in York when the shire wanted to create an ‘equine precinct’, a well-known environmental advocacy group showed no interest despite my repeatedly writing to them — they were focussed on their own campaign (necessary, but that doesn’t alter the need to be connected in these things). We will possibly have different views on how to approach issues and the best way to resolve them or advocate, but we need to communicate and, where possible, work together without hierarchies.

Astonishingly, just to finish the day, a far right ‘One Nation’ senator said in his maiden speech to parliament today that the nation belongs to ‘Anglo-Celts’, and that it is — wait for it — ‘being colonised’ (by non-Anglo-Celts?) and this his sort (the ‘real’ people of Australia?) are ‘being swamped’. He wants the ABC replaced with the ‘Patriotic Broadcasting Corporation’. It would seem like a sick joke but it’s true. Australia IS on the verge of falling into full-blown, literal fascism.

[end of extract from journal]