The Duchess of Malfi at UWA

By John and Tracy

From the moment we sat down the show looked promising – a simple set with plain flats – and the opening dance scene was eye-catching. Other than the odd piece of furniture – and at one point a starkly menacing coffin – most of the scene changes required nothing more than the deft shifting of these flats, ably handled by the cast.

I love the kind of understated design and direction that is not so minimalist as to be pretentious, but knows how to enhance a complicated plot and set of characters by keeping it streamlined. 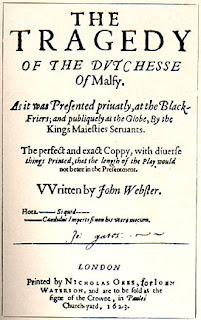 I agree with what Tracy says above. It’s a richly cross-genre play, ranging from wit through an almost surreal burlesque (at least to modern tastes), through horror, to a more ‘conventional’ (maybe read ‘modern’) notion of tragedy. Teasing all these elements out so effectively shows what a brilliant director Steve Chinna is.

Tracy and I have worked with Steve before, and he and I are colleagues at UWA. I have met few directors and thinkers on theatre with as much depth, creativity and versatility as Steve. All his skills were on display in this production.

It’s such an intense blast of grotesque psycho-trauma fully charged not only to entertain but to challenge us as audience. It even asks questions of the theatre itself. This play includes some of the most memorable lines in English-language theatre. Beneath its in-your-face drama is an almost surprising subtlety, so hard to weave in a world in which the “ten thousand several doors” that death has, “for men to take their exits”, are almost default settings.

This brings to mind two of this production’s great aspects: the entries and exits that were deft and often stimulating in themselves, ominous and full of suggestion; and also the skilful handling of the substitutions within the blank verse, the movements into prose speech (e.g. Antonio), and the mini-closures of rhyming couplets. Steve Chinna is a supreme interpreter of verse in drama, much like Tim Cribb of Cambridge University.

The actors handled these with varying degrees of success, but what stood out across the performance was their ease of expression: the language glowed with clarity, as if the events were taking place down the road – though it’d be a very weird place they were happening in... The music was excellent, especially the live flute and percussion, never overdone.

As for the actors, I was taken with most performances in different ways at different times. After the show, I chatted with Steve, and he noted that he had asked the performers to let their characters grow and evolve with the moment. To be ‘mercurial’, I think he said, rather than operate within the expectation or ‘stencil’ of a character. Astute advice. It’s what allowed Aisling Murray as the Duchess, who began by playing the role a little too rigidly ‘haughty’, to settle into a far more complex and wide-ranging performance, coming into her own particularly in her last scenes.

Similarly with David Roman’s Duke Ferdinand: his interpretation of the Duchess’s mad, conflicted brother, actually blossomed with the revelations of his lycanthropy — Roman’s extreme take on this actually brought pathos as well as grotesque ‘humour’ to the part. There was tragedy in his revenge lust as well.

The Duchess’s other brother, the lustful and plotting Cardinal, was played with staid poise and perverse aloofness by Patrick Whitelaw. One of the play’s star turns was by Harriet Roberts as the saucy and coquettish Julia, the Cardinal’s mistress. Her timing was excellent.

Maybe the essence of this production’s tackling of the absurd contradictions in John Webster’s tragic revenge play was embodied in Mark Tilly’s Bosolo (‘a malcontent’) and his perversities. Tilly played Bosolo as both panto-villain and traumatised wrestler of split personality — a Jekyll and Hyde act that could have fallen flat on its face, but didn’t. In fact, insofar as he is the machine driving the plot and the ephemeral nature of ‘conscience’, I think he nailed Bosolo.
Posted by Tracy Ryan at 10:05 PM No comments:

Reverting to the Personal Pronoun: engaging the ‘lyrical I’

By John; posted by Tracy

The reclaiming of ‘I’ isn’t a gain, but a willingness to be held accountable for the necessarily compromising effects and affect implicit in the deployment of words. The concentrations of poetry increase the impact of allusion as much as declaration, and the machinations to avoid locating culpability for the possibly deleterious effects of one's words should be held to account.
By removing the unified self in its overt guise from the picture, the poet seeks both to universalise the text and to comment on the false claims any individual has to a ‘right’ way of seeing, into any sort of unique knowledge. It’s a social ploy, and that’s useful, and it resists capitalist fetishisation of text as brand-named product, and questions the authority of any one individual.
But it’s a smokescreen because whether written individually or collaboratively or even instigated in some random way, the original impetus necessarily relies on at least the notion of personal subjectivity in terms of its reception. All readers and listeners listen and read differently — most of those who reject the ‘I’ would at least consider this likely.
Tendentious, yes, but any claims of the best way to programme a poem are just that. And to my point: the ‘I’ is very rarely ‘honest’ anyway, and can only be a representation of the idea of self even with the most self-centred, world-seeing, self-defining authority of a poet. The I is the ultimate persona.
However, I believe one can bolster the ‘I’ with a personal willingness to take responsibility and be held accountable for witness, observation, and the many slippages and ambiguities that make a poetic text. A super-ego I, that reflects on the conditions of not only its making, but its accountability.
This is achieved through mixing verifiable ‘fact’ with that which evades confirmation: the conversation between these qualities is at the crux of the poem, and in many ways the ‘I’ manages this conversation (its conflicts and agreements and neutralities) within the poem.
The accountable I is the mediator, not the judge of the poem. Its accountability is to do with the value of presence in the text, and in the environment observed and/or created by the text. Its position is one the reader/listener might scrutinise: its position in terms of how it conveys and manages the presentation of poetic ideas and poetic language.
What’s more, it’s not (necessarily or necessarily desirably) the job of this ‘I’ to ‘confess’ anything. To hold one’s hand up and be responsible for one's own actions is not to have to lay one’s private history on the table. But it is an offering of a form of ‘privacy’: the accepting that even in its most private moments of creation the writing of a poem for publication is an act of declaration, a surrendering of varying degrees of privacy.

Posted by Tracy Ryan at 6:23 PM No comments:

By Tracy
I don't usually get to watch films on broadcast t.v. (not enough time, too much else to do!) but last night, having sat down to watch the first episode of Chris Lilley's long-awaited new series Angry Boys (mixed feelings,  but it's only the first, so we'll have to wait and see) -- well, I got caught, because a French film came on straight after, and I stayed up too late.
The film -- Carine Tardieu's La Tête de Maman (In Mum's Head) (2007) was mixed, too: I'm not a fan of the quirky, mildly pretentious bits that French film-makers seem to feel obliged to put in as perhaps some sort of nod to their often-experimental and non-realist history -- one more sequence that might-be-happening-but-isn't, one more irruption of a fantasy-character into an otherwise smoothly plausible plot, and I switch off.
However, certain aspects were quite compelling. The teenage daughter of the film, Lulu, is a tomboy on the cusp of maturity but stuck there partly because of the grinding pressure of her mother's (Juliette's, or Juju's) permanent depression and fixation on apparently psychosomatic illness.
Lulu accidentally discovers a photo and then a home movie in which she glimpses her now-staid mother's pre-marital life, twenty years before. Juliette back then was vivacious, happy, freewheeling and open to experiment of all sorts, madly in love with Jacques... not the man she married.
The rest of the film is about what happens when Lulu digs around in that past and tries to "improve" things for her mother. Despite the sometimes-twee gestures the film makes, the central story -- how naive youth works on assumptions about its parents -- kept me watching, and was handled with appropriate ironic distance on the daughter's actions as well as compassion for her own process of growth and lesson-learning.
(I could have done without the cameo from Jane Birkin, whom I find somehow irritating. Lulu is an obsessive Birkin fan and the singer-actress appears as herself in fantasy mode, as a kind of substitute mother-figure to Lulu, materialising and vanishing after their short dialogues.)
It's fairly well-acted in the parts that count (mother and daughter -- the rest are foils, even the waspish grandmother) and kept me watching till the end, in spite of myself...
(NB On the web this movie is often named with U.S. spelling, In Mom's Head.)
Posted by Tracy Ryan at 7:05 PM No comments:

Poem by John, posted by Tracy

The marks a crosscut saw ‘insinuates’     (too soft, too quaint?)

Make carnevale and genealogy     (fate of tree a footnote)

Or the shearer working hand-blades     (sheep’s relief and distress)

Or Irish dancers smacking the road with heels     (midday heat, not twilight)

Carnevale on May Day where locals aspire ‘down’     (each a rebel, ipso facto)

Carnevale on May Day where Moondyne Joe rides again     (here, onset of

And so the orange metal of the mobile forge     (beaten flat)

And so the coconut shies to raise funds for a swimming pool     (the river run dry,

Each recognition a brief encounter     (acts of mutual tolerance)

Each official doing-the-head-count     (religion is truly the weather)

Each sale a contract     (with the devil of Settlement)