Second poem from long ago, in memoriam Mhairi 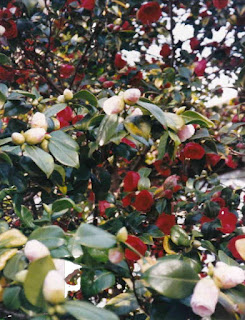 I lose you for a moment and then catch sight:
crouched under twin camellias you approach
with the lens as one might
a timid animal,
allowing them soul.

I hold back: double pink, double red,
such richness best at a distance
or I am swamped
unless it’s instinct
tells me not to intrude

between you and the beauty
of your own response.
Starvation for months
and now this glut of colour
almost insulting in its abundance.

Not all at once
but bud by snub bud they unloose
their vivacity, raised cups
we’d slake our hurts at
if we could only trust

they’d last – longevity
and faithfulness, the books says
so you store an image
to paint them from
like tracing and retracing
a lover’s name. 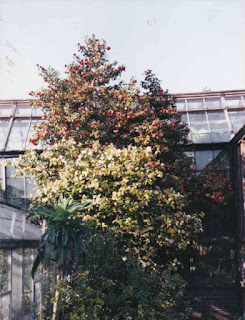 All these photos were taken by Mhairi in the Cambridge Botanical Gardens, which gave me the central idea for the book Hothouse, from which the poems are themselves taken. 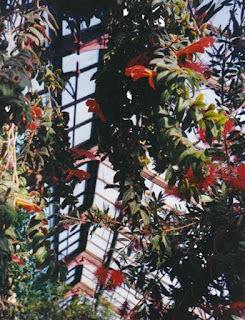 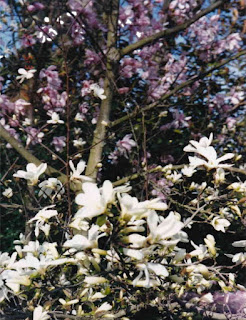 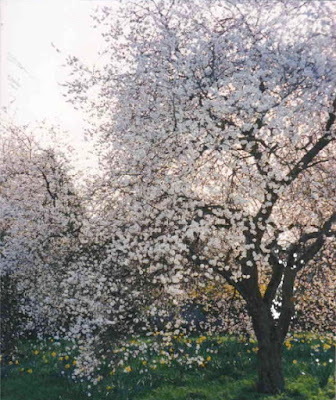 First poem from long ago, in memoriam Mhairi

These poems were not written "in memoriam" but during the course of the friendship, and were published in Hothouse (2002/2006). I never thought to be posting them so long after, and in such circumstances. I just learnt that Mhairi passed away in the UK last month. She was a gifted poet as well as pianist, a film buff, and a savvy winner at all board games.

She was also a fluent speaker and avid reader of French, and a half-dozen of the best French novels I have on my shelf here at Jam Tree Gully were gifts from her, because she loved to give presents.

The first poem takes a line from a beautiful DH Lawrence poem, which ends "in the flood of remembrance, I weep like a child for the past".

Small walls and the furniture
too large, as in a dolls’ house,
or a Dutch interior
the swollen disproportions
of a dream;

suddenly the hunger
to pick it up again, dropped stitch,
to let fingers go as they know because
it was trained into me
every morning

or because I was born to it
and let it go, wasted and taken for granted
like water; this our idiom
I’ve abstained from
out of some foolish notion

of imperfection, forgetting the pure pleasure
the insidious mastery of song
that makes the child’s heart beat faster
as I stand there
wordless but listening
with my arms around her
in the chill spring.

—Tracy Ryan
Posted by Tracy Ryan at 10:22 AM No comments:

The Failure of Pastoral and Australian Mining Companies' Ongoing Rapacity

exclusive, to make the buds recent if the iron
is ancient; while Rio Tinto blast and destroy

with spirit — and the company has done so
with the Crown’s law on their side...  it’s

impossible to justify pastorals
in any form, even as countermands

to the ideas they carry to infiltrate
and contaminate. It’s impossible

to configure in any way that best
serves its plea, and makes context

of reading, of land scaped into contra-
productivity, cultivated against its spirit.

All such comparisons fail, some are odious,
but death is death and tyranny tyranny

bound into sheaves for emperors
and land owners, for ‘readers of taste’,

and satyrs OD on toxins and drop dead,
this is why in the end ‘pastoral’

can only be an idea of the market —
isn’t that so, isn’t that the scenario:

the spending splurge, the largesse,
ahead of a bountiful harvest, profits,
giving with one hand?

John Kinsella
Posted by Tracy Ryan at 2:38 PM No comments: