Some Graphology poems from the journey

Poems and text by John, posted by Tracy

From John's journal: I've written a number of 'graphology poems' relating to our journey to Adelaide and back. I have written four or five sequences (including Poet in A Train, which Vallum editions brought out in Canada) relating to this west-east journey, but all have been from the perspective of a train passenger. Because I no longer fly, I have gone across the Nullarbor a number of times on the train over the last few years. (Obviously the train is better than the car, but there were three of us on this occasion.)

Driving across with Tracy and Tim was a very different experience. Whole different insights and interactions with place. The collective experience of engagement en famille was special and enlightening. Some of the poems I wrote during the journey were actively part of the manuscript I have been working on recently, Book 6, which comes out of an engagement with Virgil's Aeneid, Book 6, as a precursor to Dante's Divine Comedy, and my own 'distraction' on Dante's great work. But I've also written a dozen 'graphology poems' - smaller, momentary 'glimpse' pieces that fit within the fabric of the 'graphology' sequence I have been working on for the last fifteen or so years. The numbering is sequential but also arbitrary in so far as I have not written 3000 (or 4000 or 7000!) of them, as numbering at times might suggest; rather, it is to create a location canvas on which the interludes might appear. Numbers and texts seem so closely related to me, and to be bound to one kind of sequencing is to miss the point of the vitality of number 'screens'.

I also scratched or created poems in dirt and sand on the way, 'poems of dissolution' that would have vanished once the wind lifted or animals scratched at their surface. I recall one night going out into the saltbush and bluebush and ubiquitous wild oats you find fringing those small points of habitation along the highway, and listening to and watching in the moonlight hundreds of rabbits moving about. Parts of the limestone plain have become 'their' plain in so many ways. And the wedgetails which scan the ground during the day. I wrote a poem there - scratched with the point of my boot in the limestone dust, and then on the page. Might get to typing that one up.

One of the experiences that will really stick with me was driving through the length of the South Australian wheatbelt - knowing the West's wheatbelt so well, it was equally engaging and distressing to see the vast monoculture of beige and bisque and off-gold in another space, on the edge of the vast dry, though in fact it rained as we passed through. And the great yields they are getting this year as opposed to the drought-ridden minimalism of the west. The ironies are the same. My being enraptured with those ironies slightly out of kilter, a little uncanny, but feeding on the same impulses. The Goyder Line is much further north - it's the line beyond which the pastoral fails in many ways due to dryness. I was thinking of another imaginary southern line where wheat-growing fails. In the west, they keep clearing further and further out beyond wheat-growing reality, wasting scrubland for a yield every few years. Insanity. And as they clear the scrub, the rain lessens and the land erodes, and is peeled away by the winds.

Prior to departure east
an all-black black-headed monitor
swaggered — I say this in the way
young Tim imitates my walk
from behind as male habit,
when in fact my swagger comes
from watching monitors
and is, I’d like to think,
largely unconscious — swaggered
the range of the window, hunting
sand between ridge and house.
Magnificent! Then, days later
on the Bight, at 'observation
point two' we passed the first time
round, crossing over (now,
we’re talking back, and west),
a skink and a gecko on stone,
in bluebush and saltbush;
I didn’t identify them
precisely though if I think about
their gait, twist, slither,
I will come up with something.
Names, imitations. Imprints
of character.

What is wheat’s Goyder line?

Counties and hundreds,
mono beneath the hammock,

filled to the gills of the boot,
granary of foreign exchange,

we see those homesteads
enveloped in opening,

at most, windbreaks
of pines, imported.

Drive from mallee
dust as dry as fallow,

lessen rust. And, sad
to say, I got excited.


John Kinsella
Posted by Tracy Ryan at 4:13 PM No comments:

Posted by Tracy; photos by both of us. 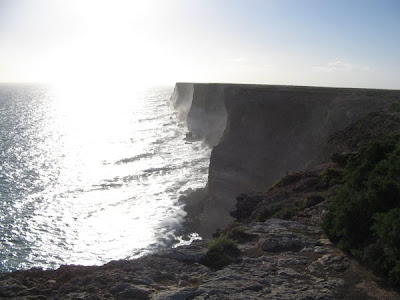 The cliffs at the Great Australian Bight. These magnificent cliffs run for hundreds of kilometres along the bottom edge of Australia. East of Eucla they are called the Bunda Cliffs; in the west, the Baxter Cliffs. Together they're apparently about 400km long.

I first saw them when I was twenty and have never forgotten it. Seeing them again was even better. 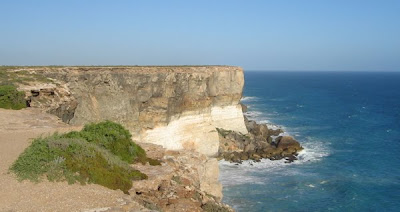 There is a section of the Nullarbor where the cliffs run inland, forming the edge of the Hampton Tableland; below it are the Roe Plains. This photo, taken at Madura Pass, looks out to the Roe Plains from up on the Tableland. Madura Pass is one of the highlights of the journey. 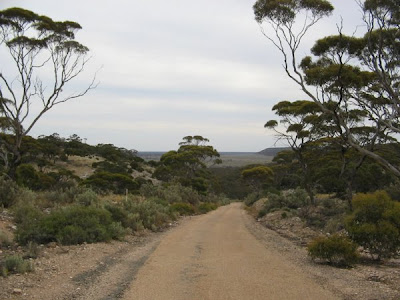 I wish I had taken a photo of the moonlit Nullarbor, achingly beautiful -- it makes you want to lie flat on your back on the ground and just stare at the sky.

There's a detailed book about the Nullarbor by Neville Collins, The Nullarbor Plain: A History, including many striking photographs. It surveys the region's Aboriginal history as well as colonial incursions, and has other sections covering everything from flora and fauna through UFO claims, hoaxes, space debris (Skylab fell near Balladonia, on the western edge of the Nullarbor, in 1979), to meteorite finds and nuclear testing. Collins was born at Ceduna in South Australia, to the east of the Plain.
Posted by Tracy Ryan at 8:31 PM No comments:

This is from David Musselwhite's 2003 book, Social Transformations in Hardy's Tragic Novels: Megamachines and Phantasms.

... in Tess, Hardy seems to be working with a wholly new conception of what is entailed in the 'construction' of a 'character' or of a 'consciousness' -- a conception that finds parallels in the psychoanalytical notion of the phantasm where the human becomes human -- acquires character and consciousness -- when the accumulated and consorted bruit or dit -- the lore -- of the tradition or the culture becomes accreted around and inscribed on the blank surface of the physiological body...

...In a sense what Tess becomes is a kind of 'phenomenological palimpsest' -- or, to recall another favourite image of Freud for the unconsciousness, a 'magic writing block' -- of all that she unconsciously registers of what has been said or thought about her, of all that has anticipated and been brought to bear upon her, of all the phantasmatic events that she has passed through. What this means is that Tess becomes something like an 'expressive digest', or 'phenomenological prism' of the world into which she has been born -- a world not just of material conditions but of a host of pre-existing roles, attributes and singularities. I think this accords well, in fact, with what we sense of her luminous presence. Much has been made of Tess as the object of voyeuristic fantasy but much less has been said of the degree to which we see the world through her. Indeed at times in the course of the text Tess seems to function like an 'expressive cursor' or like one of those ruler magnifying glasses that come with miniaturised editions of the Complete Oxford Dictionary. (p. 117)

Even in this glimpse of only one chapter* of Social Transformations..., we can see David's typical ability to think things through from an "opposite" angle, to consider Tess as see-r and not just seen; and the outlandish but exact and just image of something unexpected (Tess as a dictionary-accessory!). The theoretical underpinnings of the book, again in Deleuze and Guattari but even more extensively in Laplanche and Pontalis's work on the "phantasm" are too complex to paraphrase here -- so I urge anyone interested to get hold of Social Transformations for themselves.

*There are actually two chapters on Tess in this book. The other novels studied are The Mayor of Casterbridge, Jude the Obscure (also two chapters) and The Well-Beloved.
Posted by Tracy Ryan at 6:49 PM No comments:

Today would have been David Musselwhite's 70th birthday (he passed away in February this year). In our writers' group today we read an Emily Brontë poem he particularly admired. Now in honour and memory of David, I want to redirect people to his marvellous books, beginning with 1987's Partings Welded Together: Politics and Desire in the Nineteenth-Century English Novel.

In this book there are wonderful chapters on Austen, Brontë, Thackeray and Dickens, but for me most strikingly of all on Mary Shelley. Here's a characteristic quote from "Frankenstein: The Making of a Monster":

...the Monster confounds all classifications and identifications: it is alive and dead, male and female, master and slave, pursued and pursuer, parent and child -- all at once. Rather than allowing itself to be located in a system of classification what the Monster embodies is a radical dispersal of roles and states and a nomadic roaming across and between them. The Monster is always ahead or behind, always elsewhere, ever in a condition of migratory adjacency. Moreover the tracery of these migrations, like the scars on its body, are not the investments of limits but the openings of boundaries, the splitting of ever new laminations, the establishment of ever fresh surfaces. The Monster's wounds are not the evidence of a history but the sensitized possibility of a beginning. Or, rather, it is because there has been a history that there can be a beginning -- just as there can be identity because there is difference, or thought because there is language. One does not begin with the punctuality of a birth but the reappropriation of a scattered genesis. One begins, that is, with repetition. (pp. 69-70)

The chapter on Emily Brontë is also original, inventive and memorable -- in one of David's obituaries, UK academic Gary Day said,

"I've yet to read a better interpretation of Wuthering Heights. For my money, [David] was the best reader of literature we've had in the past 25 years."

In the book's appendix there is an extremely useful entrée to the ideas of Deleuze and Guattari, included to provide background for the way David's book draws on their work. With regard to his theoretical bases, David wrote in the introduction,

"... I have endeavoured as much to let Austen, Shelley, Brontë and the rest read Derrida, Foucault and Deleuze and Guattari as the other way around. I also happen to think that is the right way to go about things."

David was always one for the closest attention to the text, and used to joke, despite his affinities with post-structuralism, about having been a student at the "last lectures of Leavis", a legacy not easily shaken off in its best aspects.
Posted by Tracy Ryan at 5:28 PM 1 comment: