In this time of pandemic, with much anguish in many places, and every signing-off a false signing-off because of ‘second waves’ and uncertainty about recurrence and persistence, the location of the book is a strange and disturbed one. Where does it sit as a tool of address, redress, scrutiny, respect, dialogue, certainty as record?

As I notice remaining ‘intact’ or persisting environment not only still being devastated, but often increasingly devastated or marked/’pegged’ for future exploitation under a blanket of lockdown and human-planetary crisis — via obfuscation through distraction, and the new economics of ‘recovery’— I think more and more about the site of the book: its conceptual liberations, its pragmatic costs of making (in so many ways), and its sanctuaries, too.

Going through many ‘physical object’ copies of books in recent times, I have been reading and thinking about ‘signed’ and ‘inscribed’ copies, and the notions of gifting and possessing, and the politics and ethics of personal and public ‘libraries’: of restraints of access, of ‘borrowing’, of ‘open access’, of versions created specifically for digital access.

And I’ve also been considering the issue of ‘older books’ scanned to recreate the (vicarious) experience of encounter with books made closer to their time of writing (books written with very different and differing views of how they were to be encountered over the centuries and locales of making), and maybe edging towards some notion of where the augmented text meets the earliest published version. And by ‘augmented text’ I mean: interventions by people reading, dialoguing, recording, highlighting as engagement or prompt to memory, or gifting the books — inscriptions, annotations, marks etc; and the authors themselves dedicating, signing, gifting, correcting annoying missed typos, arguing with their own printed or published texts... revising for reissue or resaving...

In processing all of this, I came across a few signings by Jacques Derrida, whom I liked and greatly admired, but find myself often (and in some ways increasingly) arguing with, which I am sure he would have expected. These books were gifts, and though the signings don’t ‘show’ that, the fact they were alters the nature of reading for me/us — the personal in the private realm of the page, the public in the act of doing something (signing) he had done many times before over his life.

Derrida was a poet’s philosopher and a philosopher of poetics in whom all textuality encountered a politicising matrix, all words and marks were signs that had and have consequence. He told me once that he had dreamt of John Donne not long before I spoke to him on the phone, and he could see handwritten poems, if I recall correctly. Were they in English or French?!

Below are scans from three books he gave me, or me and Tracy — of their covers and their signings. Signings that are small poems as significant to the recipients, maybe, as a Mallarmé’s fan stanzas. Names and dates, and maybe a place — yes, shaped, placed, the circumstances of writing (and reading)... that’s what makes poems. And consider their contexts... ‘What is Poetry’... and so on and on. From other Derrida signings I have seen, I note the familiar positioning and slant on the page, the dating, the sharpness of the moment of delivery. Quick as a flash. Done. But part of something flowing and continuous as well. Episodic, and yet points of repair [repère]. How many did he remember doing?

And vitally, which page to sign was chosen to sign? — a blank page, a half-title... the written text speaking with open field of the ‘blank’ or in dialogue with printed text, the nature of lettering, of calligraphy. The pen and the printing block. But each is a case itself, as well.

So, Genette’s paratext and something extra? Maybe, but each enactment in the book carries its own traces, and its own echoes, even consolations and maybe consequences. So let’s acknowledge:

'... the dedication, understood as trace, is necessarily linked to individual memory. The dedication has that demiurgic capacity that allows a memory to be reactivated upon each reading.'

(translated by Tracy Ryan — see here for the original French)

The book is a concept that doesn’t need old-growth trees to die, to be turned into pulp — in fact, over thirty years ago a friend and I were trying to make paper in a large vat from straw-stubble and other materials, spread and rolled and so on in the sun, for a book of my poems... and I did a few things on wheatpaper in those days.

The burnt offerings of stubble that add absolutely unnecessarily to global warming have a future as poems and fans and books and places for both inscriptions and signings... for imprint pages, for front matter, for afterthoughts, for affections and questionings, for recording a moment, its temporality and spatiality. 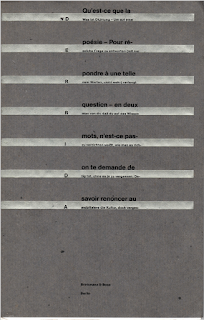 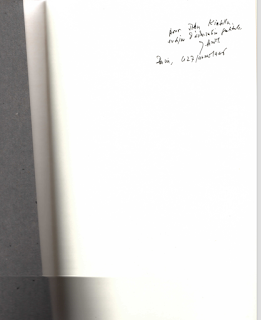 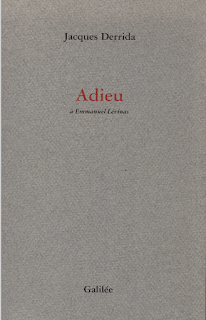 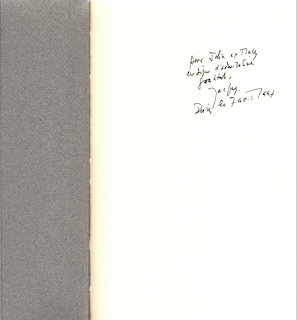 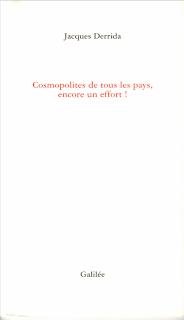 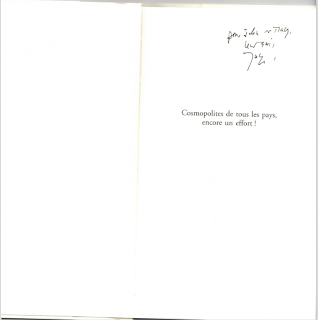 Posted by Tracy Ryan at 3:33 PM No comments: