The Beat that My Heart Skipped 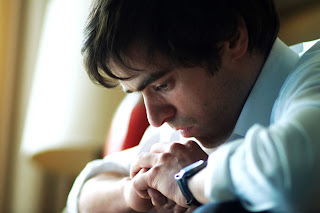 I watched this film recently for the third or fourth time because -- despite an unsatisfying ending -- it has a lot to offer. (In French its title is De battre mon coeur s'est arrêté, made in 2005.) It's apparently a remake of an American film, Fingers (1978), which I've never seen.
Like many of the 'parvenu' narratives,  it's another story in which the protagonist's two worlds clash, but here the two worlds are more about modes of living than exactly class, though that's not unconnected...
'Thomas' (Romain Duris, excellent in the role) is a young man whose now-deceased mother was a concert pianist. His father, still very much in the picture, is a moneyed thug, and Tom has followed him into a life of violence and brutality in shady real estate dealing.
Tom is not a likeable character, and the film sets this out very clearly. Yet when he glimpses the possibility of changing direction -- becoming a pianist like his mother -- you can't help identifying with him and hoping he will come good through music. There's a strong feeling of potential sensitivity and power of expression barely contained in this taciturn and often sullen individual.
But it's never that easy to switch tracks, and the patterns and entanglements of the life Tom has led till now pose a dramatic challenge to his 'ambition'. Violence is not easily left behind...
The last section of the movie (to me) feels tacked-on, but the rest of it is still worth watching. I have also caught part of an earlier movie by the same director, Read My Lips (Sur mes lèvres, 2001), that had me on the edge of my seat -- again, a clash-of-two-worlds story -- but I've not managed to get a copy so as to watch the parts I missed.
The director, Jacques Audiard, has also made the more recent film A Prophet (Un prophète, 2009), which I missed at the cinema -- will have to watch out for the DVD.
Posted by Tracy Ryan at 10:23 PM 1 comment:

This is where I walk Tim to the school bus in the mornings. It's hard to capture the depth, the distance of those hills... 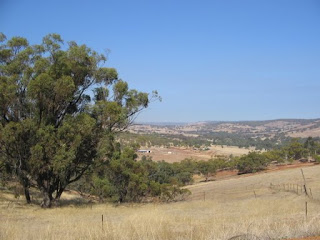 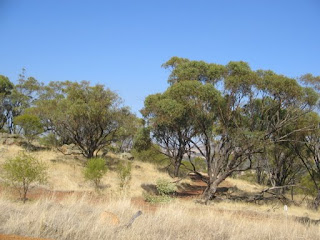 Posted by Tracy Ryan at 6:11 PM No comments:

Stendhal's literary influence on subsequent writers is huge, so theoretically this topic could go on forever.
What interests me at the moment is the way so many narratives have picked up on the motifs of The Red and the Black and re-worked them into such different and often compelling stories, or films.
Julien is the paradigmatic upstart whose destiny is crime. I haven't read John Braine's novel Room at the Top, but I have seen the film -- first many years ago in Britain, and then again recently (VHS from Planet, almost the only place you'd find it in Perth!).
Room at the Top follows Joe Lampton as he attempts to make his way up in society. Joe has little in common with Stendhal's Julien except perhaps his youth, his humble origins, his ambition -- and the fact that he loves an older woman but pursues a young woman who's the daughter of a rich and socially important man.
What goes wrong as a result of this conflict is not quite in the vein of Julien's criminal trajectory, and the endings differ accordingly (I don't like spoilers, so that's as much as I'll say!).
But the story shows a clear inheritance from Stendhal's plot, transposed to 20th-century Britain and a different set of class circumstances, with many of the same mistakes and emotions.
It's a finely watchable movie with a poignant performance from Simone Signoret as the older woman and an appropriate cold, callous manner from Laurence Harvey as Joe Lampton.
Apparently a t.v. series based on the character of Joe Lampton, Man at the Top, also written by John Braine but set after the movie narrative's end, was screened in Britain some decades ago (thanks to G. for this info).
Posted by Tracy Ryan at 7:41 PM No comments:

By Tracy
Here is the link to the obituary I wrote for my friend and former teacher, David Musselwhite, who died in February this year.
David dedicated his first book, Partings Welded Together, "For my parents. All of them."
For me, intellectually and emotionally, he was certainly one of my "parents". I think this was true for many others too.
Posted by Tracy Ryan at 2:01 PM No comments: