Yesterday we went for the first time to a place called Oak Park Reserve, just out of Goomalling.

It was late in the day but we still managed to walk around one loop of the track, which runs through a section of the reserve full of flat rock and sheoak, and leads past an area with gnamma holes. These are water-collecting holes in the rock, sometimes very deep, made or modified by Aboriginal people (in this area, Balardong-Nyungar). They occur in other parts of Western Australia too.

Because it was getting dark and shadowy I couldn't easily get a photo of the gnamma hole we saw, but I did take a snap 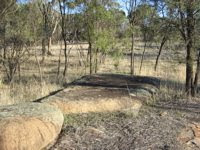 of one of the flat granites.

Where the track begins you can also see grooves in the rock which the signs say were where Nyungar people sharpened spear and axe-heads, among other things.

Around the reserve are big lakes which are now completely salt. It's a bit like arriving at Lake Taarblin further south: 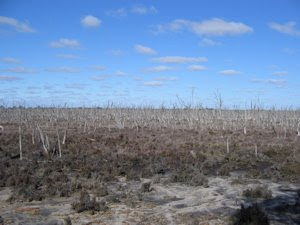 Dead trees in a waterless expanse. The mind tries to reconstruct how it must once have looked. Farmland surrounding Oak Park is so saline and bare that it misled us, as we travelled, into thinking we must have overshot the designated "picnic area", but this was it.
(Above: Lake Taarblin, south of Wickepin)
(Below: Edge of salt lake at Oak Park Reserve) 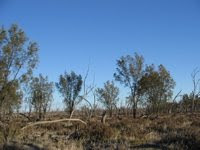 We saw only a small part of the reserve, and hope to go back again and learn more about the area, especially its significance to Nyungar people (which must be ongoing) within the context of respect and sensitivity for that significance.
Posted by Mutually Said: Poets Vegan Anarchist Pacifist at 12:38 PM