July 30 marks 190 years since Emily Bronte's birthday, and coincidentally it's the birthday too of Kate Bush who wrote the pop song based on Bronte's Wuthering Heights. Kate's turning 50. 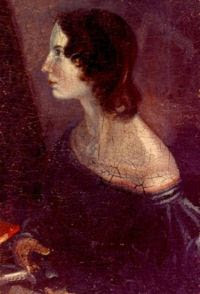 I stopped listening to Kate Bush in my twenties, but she was a huge influence on me in my teens. (As John Lydon/Johnny Rotten, of all people, said, she was a "true original"!)

Emily Bronte, though, has never gone away.

Left: Emily Bronte, from a portrait by her brother Branwell Bronte.
Posted by Mutually Said: Poets Vegan Anarchist Pacifist at 10:01 AM