Rub margarine into flour until mix resembles breadcrumbs, then add half the grated vegan cheese and stir through. Mix in the soy milk, reserving a tiny amount for glazing if you want browned tops. Halfway through baking, use the remaining grated vegan cheese to top the scones**. Bake about ten to fifteen minutes at 190 deg C. 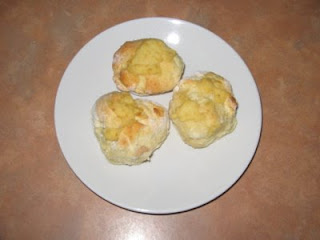 *I used Edam-style Cheezly; there are other vegan cheeses. Not all of them melt. If you can't get a commercially made vegan cheese, you can give food a similar flavour by using nutritional yeast (Engevita, for example, or Healtheries Savoury Yeast), though this won't melt on top and can't be grated; it's a flaky or powdery substance, depending which sort you use).

**Cheezly melts fast, so I add it as topping halfway through -- same when making pizzas.
Posted by Mutually Said: Poets Vegan Anarchist Pacifist at 5:15 PM