By Tracy
Even though they're starting to wither, I wanted to capture these beautiful flowers that have now sprung up here a second year. They were obviously planted before my time and so were a surprise when they first bloomed. 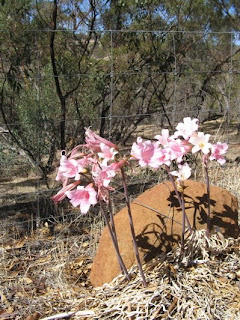 I love bulbs and have often written poems about them, probably because of their startling aspect, as well as their recurrence, their pattern of disappearance and regeneration.
These are what people here call "Easter lilies"; also known as belladonna lilies or naked ladies. It is not the same flower (in any case there are various flowers) that people in the northern hemisphere call "Easter lilies" -- and our Easter is not in the spring...
Here is an excerpt from a five-sonnet sequence I wrote when they bloomed (much more pinkly) last year; the full sequence was published in the UK's Poetry Review. The sequence is called "Pictures, as Promised".
1.
These are the lilies, flushed with shocking pink
people call Easter lilies here, the way
names grow from usage, cling to what we say
they are, however tenuous the link
to language elsewhere. Sprung up in the chink
between the septic tanks, resistant clay,
marking a distance and a funeral day,
so far and so final. We always think
there'll be one more occasion, one last word
to fix the thing, to capture what was meant
clearing the air -- not that we'll be cut short.
Rest of my life, the news you never heard,
and now, the images I never sent:
fading as light, the best of them uncaught.
*********
On a much happier note, I just received the first advance copy of my new book of poems, The Argument, which will be out in July from Fremantle Press. It's always a strange moment, seeing the thing take physical form.
Posted by Tracy Ryan at 1:21 PM

I guess I may be excited at the prospect....