Equipage (via Rod Mengham at Jesus College, Cambridge) have recently brought out my anti-greed and pro-ecological long poem based on Beddoes’s Death’s Jest Book, Rapacity. The cover is below. 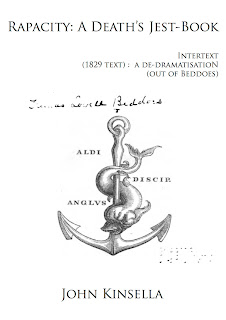 I want to take this opportunity to qualify my thoughts regarding the notion of ‘property is theft’, which I have cited many times over the years.

First, this from an unpublished article on (anti-) capitalism and poetry:

‘I object to the rapacity and selfishness, and have always believed that ‘property is theft’ (in the literal sense, not in the hypocritical and contradictory sense embodied by Proudhon who, as Murray Bookchin points out, was not in essence against certain forms of private property under certain conditions).’

and this from a published chunk of (new) autobiographical writing that’s come out of living at Jam Tree Gully:

‘…onto our place. Our property. I reject the notion of property. Custodianship sounds too appropriative, and for a non-indigenous resident, all too convenient. Really, that’s the issue that burns below the surface of all I write about this place. Proudhon is only halfway there with ‘Property is theft’. Some theft is more theft than others. He fails to investigate the nature of such theft: that’s more the key to understanding the implications of surveying, gifting, selling, claiming.’

and from a piece collected in the book Activist Poetics:

‘So much poetry does this and convinces us it’s best for our health. It’s not so much that I can’t celebrate, it’s just that I want to know what the implications of such a celebration are. Yes, Tim, as Proudhon noted, “Property is theft!” And so much poetry, art, and music are theft as well. The most “original” work is often the most property-like. We can only be custodians, and it is incumbent on all to recognise larger, more concentrated, and more defined custodianships. Wheatbelt Gothic is a style that allows for an observation of these considerations — it has no materiality, no claim.’

[note: ‘Tim’ here is not Tim our son, but a radical artist acquaintance]

I cite each of these to show that whenever quoting what for me is a truism in so many ways, I’ve always felt the need to qualify its usage. Murray Bookchin writes, in The Third Revolution:

‘Despite his famous cry, ‘Property is theft!’ however, Proudhon was no socialist: he definitely favoured private property, advancing an economy structured around small privately owned enterprises that would be linked together by contracts untainted by either profit considerations or by exploitation.

By making a distinction between ‘property’ acquired by ‘exploitation’ and ‘possession’ acquired by labor, Proudhon essentially smuggled into his vision a belief in private property, albeit with a moral aura. His statement ‘property is theft’ did not refer strictly to tangible economic property; nor was it intended to lead to the abolition of private property…’ (39)

When a statement becomes an aphorism or a saying, you’ve got to be wary. Anything that easy is bound to be glib and separated from its cause and effect. For me, property is theft because it denies mutual access. But property can have very different meanings in different cultures, so one must be wary of using ‘property’ as a blanket all-encompassing term. Furthermore, I suspect that Proudhon’s use of ‘property’ and concerns over control were deeply affected by his anti-semitism, which anarchists should not try to brush aside or minimise. Proudhon was a pathological bigot, and none of his words can be separated from this evil. As a statement in itself, ‘property is theft’ lives without ownership, copyright, or subscription. It is its own fact, but it needs to be given context to give it life and meaning, and needs to be wrested from the foulness of Proudhon. And if you wonder about Proudhon’s racism, look no further than his diary entry of December of 1847 with its calls for extermination and destruction. A proto-typical Nazi in more ways than one.
Posted by Tracy Ryan at 6:17 AM