Rilke wrote more than one poem about loving from the imagined point of view of a woman.

They are often translated as "(The) Woman in Love", but in these versions I have preferred, "The Woman Who Loves" as a more active idea -- "die Liebende" is the lover (not necessarily the one loved) but in the feminine, so it's hard to convey in one English word...

Both poems have an undercurrent of anxiety -- again -- I think, about loss of identity. These are not literal translations but ones which try to retain the crucial metaphors or images in each case. Both Rilke originals are rhyming -- in one I have used a kind of rhyme, in the other not. Sometimes I have made variations on a phrase that is single in the original, but whose double or triple meanings need expanding in English, to get the fuller sense.


Rainer Maria Rilke
(from The Book of Images)

The Woman who Loves

Yes, I’m aching for you. I’m slipping,
getting out of hand – my own hands,
without a hope of contesting
what’s coming to me, as if from your side
earnest, unwavering, firm.

...in those days: Ah I was all one thing,
with nothing that cried out or betrayed me;
my silence was like that of a stone,
over which the stream trails its babble.

But now in these weeks of spring
something has slowly severed me
from the dark, unwitting year.
Something has given my poor warm life
into the hands of somebody
who doesn’t know what I was even yesterday. 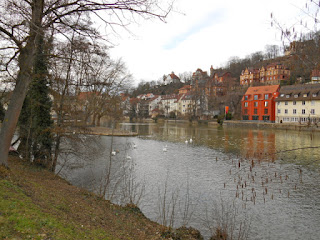 Rainer Maria Rilke
(from New Poems: the Other Part)

The Woman who Loves

This is my window.
I’ve just woken so
gently I thought I’d float.
How far does my life go
and where does night start?

I might think that all this
around me was still part
of me; transparent as crystal’s
abyss, darkening, mute.

So huge does my heart seem
to me, I could take in even
the stars; it so happily lets him
loose, releases him again,

him I began maybe to love,
to hold onto, maybe.
Foreign as if never spoken of
my fate watches me.

What am I laid down
under such endlessness
fragrant as meadow and blown
to and fro like the grass,

at once calling out and afraid
of my call being heard,
set, like a sun, to decline or
sink into another.