Perth Bushland Being Assaulted from Many Directions

The destruction of native bushland around Western Australia is taking place on a vast scale. 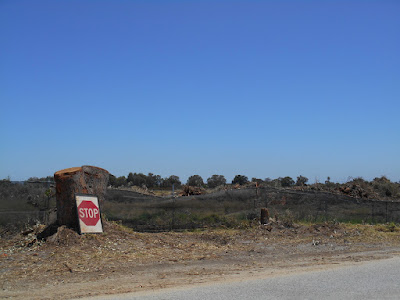 The Lemnos Street bushland in Shenton Park is being eroded and at risk of falling to/via the state government's 'sign off'. And now the Beeliar wetlands are under assault again from Main Roads on Bibra Drive — trees and wetlands to be deleted and replaced by roads/a roundabout.

But those who care about what's left are mobilised and peacefully resisting. This is a support for Paddy, Heidi and James and Nev and Nev's mum and dad, and the many others who are standing there, protecting the trees, the bush, life itself.

We need to think about this concerted, greedy, selfish effort to destroy what's left by the exploiters in government and business. Witness the length of Great Eastern Highway from Kalgoorlie all the way to Greenmount... the shaving off of thousands of hectares of vegetation (when it's all added up).

And roadside after roadside throughout the state, especially the wheatbelt, is falling like this.

But for every abuse of rare bushland, there are people standing up and saying NO MORE. We're down to the bare bones of earth now — NO MORE. Not a single tree needs to fall.

We ALL need to resist this destruction; we all need to acknowledge this assault on country. Listen to the Elders — they know, they have the knowledge.

Villanelle of Hell Down on the Plain: the McGowan Government are As Efficient Destroyers of the Environment as the Barnett Government Was!

Not that long ago we felt the reassurance of a marri tree’s
bark as a jiddy jiddy retuned the air around its ambience — alive!
Now images of tree slaughter are reaching us in the Valley.

The Edward Street Kenwick cockatoo roost has been consigned
to nothingness by Linc developers and the EPA, and its spirit struggles above —
not that long ago we felt the reassurance of a marri tree.

Such betrayal of growth undoes us all, and the patterns of canopy
and feathers are more than flights of fancy — far far more than aggressive
acts of tree slaughter that are now reaching us in the Valley.

So when we come down to the once-roost, come down to the remnants of city-
held bush, we will see the legacy of greed and profiteering — a grave
where not long ago we felt the reassurance of a marri tree.

Each subterfuge back-slapped into being, each epiphany
of outflanking the destroyers whipped-up around the table... to connive —
now images of tree slaughter are reaching us in the Valley.

A line in the sand they expose to the air — its veinwork of roots torn away —
a line in the sand garlanded with decortication. Enough! No deals! Don’t believe!
Not that long ago we felt the reassurance of a marri tree —
though images of tree slaughter are reaching us in the Valley.


No form can contain the grief of this poem
this elegy which is residue of a shattered tree,

a marri, brought down with cuts and bruises,
dismembered. Sounds gory, doesn’t it? — it bloody

well is, people! It is a slaughter, it is disrespect
of ontogenesis on a massive scale — small, big,

an eternity to construct. Battered in a moment.
Not treated with the pride bestowed on the big steel

sheds and concrete aprons, the sump to catch
the creek that still flows out of the wastes,

forlorn and sclerotherapised, so beloved
and then forgotten by the planners

and their mates in cahoots with the profiteers’
endgame. Nev’s mum said she put her hand

on the dying stump and it bled an imprint,
her hand lifted to show the blood of world.

and carries it around so we can remember.
How many other lives will we let down?

Jiddy jiddy flies manic, wondering where
it is now, where what was has gone, where

it will land to contemplate its moods.
It catches a fly, and lets it go. Lost.

‘I tried to give a copy of your poem about Lemnos St Bush to the Minister for Planning earlier this year but one of her close officers wouldn’t take it to her saying she would not appreciate it. That is what we are up against!’

personal message from a committed environmentalist

We hear the fences have been reinforced ahead of a planning decision
regarding the Lemnos Street bushland — the minister remaking habitat in her own image —
the soothing nature of concrete, the security of windowbox planters a mission!

If the puzzle can’t be solved you can switch the stickers around to feign
a solution — make it add up? Brick tones are the new bark, Colorbond is plumage —
we hear the fences have been reinforced ahead of a planning decision.

Each patch of bush they write out of existence, each job creation
that decreates in the long run — we are expected to bow down before the signage —
the soothing nature of concrete, the security of windowbox planters a mission!

Maybe someone half-hears the singing honeyeater, catches a strain
of cockatoo call? Maybe they remember a banksia-lantern from an earlier age?
We hear the fences have been reinforced ahead of a planning decision.

The traffic pushes to ‘flow’ past as fast as it can — wary of inconvenience and the span
of a city that fits a future planned for heat and smog and redeveloped language —
the soothing nature of concrete, the security of windowbox planters a mission!

So the minister wouldn’t appreciate a poem calling for restraint, for a plan
to conserve the bushland and give breath and nurture rather than tracts of spoilage?
We hear the fences have been reinforced ahead of a planning decision —
the soothing nature of concrete, the security of windowbox planters a mission!

The tree offers to look over us

The tree offers to look over us
and we cut off its hands, its arms —
down to its life before it was born.
Right back to the start, back
to when energy became sap,
and sap fed the zodiac.
That's what gives us sleep,
then wakes us, arms outstretched.

The Trees Alongside Bibra Drive

if we study the leaves, the branches,
the ravens interpreting the stories,
we will be able to say: Yes, this planet

is inhabited — we will set our lexicons
to synch with the many voices
that emanate from its green echoes.

But as for the aperçus
of the illuminati
of the Main Roads,

well, read them with caution:
they are dust rings, debris
orbiting the planet.

Sweeney Wonders Why Government Says You Can Have This Bit and We'll Have the Rest?

for the gathering protesters at Bibra Drive


The ring-necked parrots carry messages from red-capped parrots
(who are on site) all the way up to Sweeney's mast in the smoky haze... word travels
fast in birdworld! Sweeney is perched on an NBN tower because all the roosts
he's been welcomed to over the past year or so have been chopped down,

and the cockatoos have told him to find whatever 'branch' he can to rest on. They add: There
are some people down there who want us deleted, once and for all. But Sweeney says to them —
return to Beeliar and find refuge in what's left, a great reprieve without bloodshed
was offered there and that's our hope. The red-tails say back to him, deeply sad: Plenty

of redgum was spilt and saturated and glued the sandy plain, and surviving bits not written
into the buy-off plan are being plucked at again — you know, a copse of trees here,
a stand of trees there... the soul of the place eviscerated through a rolling back
of wetland grasses, replacing with road and roundabouts that gloat like compasses.

No way! Sweeney insists. No way, surely! But parrots and cockatoos
don't lie — not like humans anyway — so I am leaving this tower! he says, no longer
huddled in fear and anxiety... I am going to swoop down and call the protesters back
to the zone, to work with us, to grow back into the land, deny the tree wreckers any feathers.

Sweeney Asks: What Am I Worth if I Don't Fly Again When All Wings are Needed?

What the tree-killers fear most is the merging of flesh with cellulose —
they ask: Does it mean that a tree sitter literally merges with a tree? Does
it mean that chopping it down might result in a charge of ... what... manslaughter?

But they need not worry — the state and its machinery, the terror
of private property, doesn't recognise such a condition. Up a tree?
Then remove them and that'll be that — tree and human separated.

But Sweeney knows better, flying past, heart swelling with pride
at seeing the human climb and meld into the tree's canopy. That's
how feathers are made, that's what keeps the world exhaling

and inhaling. Sweeney had always been confused by the separation
of symbol from fact, trilling, The tree of life is precisely that, the tree
of life. All life. Hovering above the tree with wattle birds and magpies,

with ravens and honeyeaters, Sweeney calls down to the wetlands — sweating
and alive in the caul it has spun against the spikes of development:
What am I worth if I don't fly again when all wings are needed,

when each sweep of a wing might combine lift and drag to drive off
the machines with their steel teeth, the engines that batter
the talk between trees and the life they are, they watch over.