The bungarras are large, beautiful, and unafraid. A few days ago while I was here in the library/study, one of them approached the window, raised its neck, and looked directly at me through the glass.

Here's a photo of one of these bungarras: 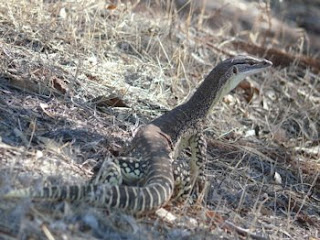 PS John and Tim just saw a huge hooded gwarder under a fig tree near the house. Tim immediately ran to get his reptile identification book (we are outside the "Perth region", but many of the creatures are here in the wheatbelt too), and then drew a big colourful picture of what he'd seen.

(If you click on the link to the reptile identification book, the one they saw is in the bottom left-hand corner of the cover: the orange/yellow snake with a black head.)

PPS I saw a gwarder too! John called me into the study this afternoon and there was another, the same kind but smaller, right in front of the window, running along the outside of Tim's (snakeproof) playground fence. It moved quickly up to the embankment and slid through the grass like something poured out: I thought of the snake drawings in Le Petit Prince and of Emily Dickinson's "A narrow fellow in the grass" -- Zero at the bone all right... and yet so beautiful. When I began to click the camera, the snake was in the sunlight; by the time I'd snapped, it was already in the shade and longer grass, so you can barely see it here. It's the orangeish curve among the orange gravel and rocks, toward the top left. 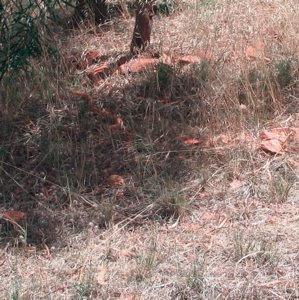