Here's tonight's vegan apple pie, sweetened with sultanas and little flecks of dried apricot, and eagerly sampled by Tim just before he went to bed.: 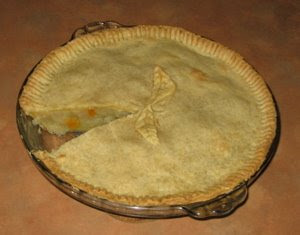 And below is the last remaining piece of the vegan lasagne we had for dinner: 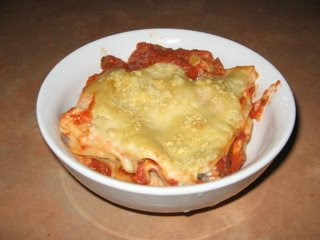 Tim was excited because for once he ate exactly the same as us (rather than a simplified, bland child's version based on the same ingredients!). He adores lasagne and in fact all the Italian-style vegan dishes he knows.

Disclaimers:
I wouldn't usually make a lasagne and a pastry dessert in one evening, but the lasagne was very light (just tomato and mushroom filling, with a vegan bechamel sauce which is made using nutritional yeast, one of my favourite ingredients).

I'm no food photographer, but at least it gives some idea...

For those wanting more detail and more regular postings on vegan food and recipes, there are some blogs dedicated to this, e.g. Notes from the Vegan Feast Kitchen, or The Vegan Lunchbox, and doubtlessly many others.

Mostly I don't use recipe books -- I'm a very informal cook. But some of our staples have come from books like How It All Vegan and The Vegan Cookbook.

Every recipe I have tried from How It All Vegan actually works -- this is not always the case with cookbooks!

And the second book, a UK title by Wakeman and Baskerville, is a kind of standard that tells you how to make everything basic (including vegan cream, vegan custard, vegan yoghurt etc -- parts of it are almost a Golden Wattle for vegans). It doesn't have any pictures other than on the cover, but it's very practical and my copy is much stained, especially from making a vegan chocolate-cream tart which I based on their chocolate custard, and will have to photograph next time I make it...
Posted by Mutually Said: Poets Vegan Anarchist Pacifist at 7:44 PM