Tim (6) has a cold... and a theory that cakes "cheer you up" when you are unwell. (A theory that is not in any way self-serving, of course.) 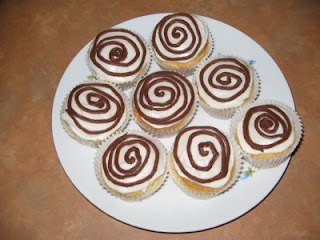 My icing spirals are a little unsteady, but they still taste okay. There are now only two cakes left, in the time since the photo was taken!

If you want to make cakes like these without dairy or eggs, you can simply substitute with non-dairy plant milks (I used soy, cup for cup) and any of various "egg replacers" -- I used Orgran's "No Egg", because it never fails and you can keep it in the cupboard for ages (it's powdered, made of potato starch basically). Other things you can use instead of egg:

Half a mashed banana (always works, but your cake will have a banana-ish tang, which you may or may not want!)
Mashed soft tofu (neutral taste), about 4tbsp
Apple sauce (works beautifully to make a moist chocolate cake, for example), about 3 tbsp
Ground flax (have never used this myself, but How It All Vegan says about 3 tbsp)

and another one I've never used, but it sounds good -- Wakeman and Baskerville's The Vegan Cookbook also suggests 4 tbsp of pureed mango...

Instead of butter, you can use a vegan margarine (Nuttelex, in Australia), or light vegetable oil, which I find makes a good texture (canola or sunflower oil -- a quarter cup per two cups of flour in the cake/s). Sometimes, when using applesauce, you don't even need extra fat content at all, because the cake is moist without it. You can also use coconut milk, but it's not super-healthy.
Posted by Mutually Said: Poets Vegan Anarchist Pacifist at 6:07 PM

Labels: dairy-free, egg-free, How It All Vegan, The Vegan Cookbook, vegan baking

now, i have to get around to making those vegan gluten-free choc chip biscuits one of these days! i bought vegan choc chips last time i was in melb... u can't get them in sydney!

yesterday i made sweet potato gnocchi (from scratch) -- used polenta instead of wheat flour. added basil and oregano from my potted herbs out the back. was delicious!! i should take pics too ; )

Sweet William's doing a vegan chocolate chip now, but I can't remember if it's gluten-free. You can get them in some Coles here in W.A.

The gnocchi sound good! I've never made them from scratch, though.