Valéry, Stendhal & the drive to "fame"

Sometimes, writers speaking about other writers tell us more about themselves than about their subject. This has been said of Sartre's book on Baudelaire, and I've been contemplating it while reading the poet Paul Valéry (1871-1945) on Stendhal*.

Valéry was purportedly an admirer of his predecessor -- "one of the demi-gods of our literature... We should never have done with Stendhal. I can think of no higher praise", yet there are times in his essay "Stendhal" when you can't help wondering how fiercely jealous of Stendhal he also was. Rather than damning with faint praise, it seems now and then like praising with damnation...

"The least foolish of great authors, yet always fretting about being read forever and found moving, Stendhal, for all his wit, for all the pleasure he took in catching himself out...was nevertheless divided between his immense desire to please and to become famous, and the opposite mania, his delight in being himself, in his own eyes, in his own way. He felt... the spur of literary vanity; but he also felt a little deeper down the strange sharp pricking of an absolute pride determined to depend on nothing but itself." (p. 13)

This sounds almost theological! -- the author as either crowd-pleaser or wilfully aloof, Satanic in his pride. (And Valéry does go on to link it to theology and "sin".) First what stuns me is Valéry's "ability" to know what Stendhal "felt" (deduced, at most), and second, the polarisation of this drama, this tension that must surely be something Valéry knows at first hand.

He proceeds with a long diatribe on the drive to fame -- almost two pages long. And at the end of it he concedes he might have wandered from his topic (er, Stendhal, was it?) a little -- "I may have pursued my enquiry rather further than was appropriate in discussing Stendhal; what I have just written would be more applicable to Nietzsche..." (p. 15) (as if to draw attention away from the emotively personal nature of the diatribe: is he really talking about himself?).

"[T]his furious urge [to give expression to our talents] is determined to sell our soul to other people; and the power within us, once it overflows and takes its course, nearly always sweeps us away from ourselves; it carries our Ego where it did not expect to go, involving it in a world of display, comparison, and counter-evaluation where the Ego becomes somehow, for itself, an effect of the effect it creates on a large number of unknown people... Once a man is known, he tends to be no more than an emanation of an indistinguishable number of unknowns, that is to say, a creature formed by opinion, an absurd public monster to whom the real man gradually yields and conforms." (pp. 13-14)

How does Valéry know this, except from his own case? Surely it can't be a general truth -- he seems to be saying writers inevitably start to "believe their own publicity".

"The man who feels himself a victim of the evil of not being unique wears himself out in inventing something that will distinguish him from his fellow men. The desire to be different becomes an obsession. And it may well be that it is not so much the desire to set himself above other people as to set himself entirely apart from and, as it were, beyond comparison with them which gnaws at him and drives him on." (pp. 14-15)

No wonder Valéry then feels obliged to concede this isn't really Stendhal. (Which makes me ask, why does he put it in the essay on Stendhal?) Asserting any of this about Stendhal would be markedly ungenerous. 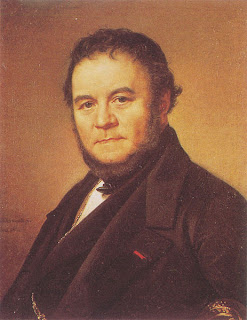 My Stendhal (probably every reader of Stendhal flatters him/herself they have "got" him) really "wears himself out in inventing" because he likes inventing, is intrigued by the whole process. Much more than by the product.

Which may be why he left so much work (deliberately?) unfinished...