It always amazes me how novels once published take on a life of their own... and even another life, centuries later.

The Guardian recently reported on a revival of interest across France in La Princesse de Clèves (The Princess of Clèves), the famous seventeenth-century novel attributed to Mme de La Fayette. 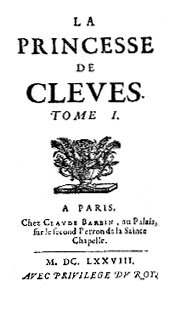 This revival is not directly for the work's own qualities but because President Nicolas Sarkozy has repeatedly given vent to his loathing for the book, which is a story of virtuous refusal and self-denial (young woman in an arranged marriage falls in love with another man but does not wish to succumb -- to say any more will spoil the plot if you're about to rush out and buy a copy in solidarity with the French Sarkozy-resisters -- not that you'd probably be able to buy it here anyway...) It's part of a whole context of protest against Sarkozian "reforms", including in the education sector, that have been making this very unpleasant President even more unpopular.

What intrigues me as a reader (and a writer) is just how far a book can travel from its earlier meanings.
Posted by Mutually Said: Poets Vegan Anarchist Pacifist at 7:30 PM