Vegan pizza and other treats

This is what the kids had for dinner tonight: vegan pizza, topped with Redwood's melting "Cheezly" (a vegan cheese that comes in several different varieties). 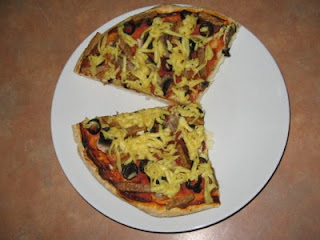 Nutritional yeast, which often sells in Australia under the name "savoury yeast", is one of the ways vegans make "uncheesy" sauces, fillings and toppings (such as for lasagne).

As far as pizza goes, you can of course put anything vegan on it. This one was mushroom, olive, and tempeh strips.

The other vegan undairy item pictured here is vegan cream. We had a vegan "Devonshire tea" for K's 18th birthday a few days ago, and I adapted a method from both the Wakeman & Baskerville book I've mentioned before, and Rose Elliot's Vegan Feasts. 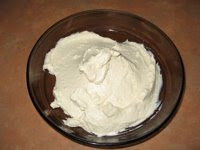 The vegan cream is made by combining, little by little, a very slightly heat-thickened cornflour, vanilla and soymilk sauce with some whipped-up Nuttelex. The texture is such that it can be scooped, piped or shaped -- and as W&B say, even floated on coffee if you thin it a little. It tastes good and doesn't have that grainy texture that tofu-creams sometimes have. (Though I like them too...)
Posted by Mutually Said: Poets Vegan Anarchist Pacifist at 8:12 PM