Took a series of high-resolution photographs of some of wildlife on the block. See smaller versions of photos below. The kangaroos are in the reserve beyond our place, and despite the fence, have free access to our place, as does all the wildlife. 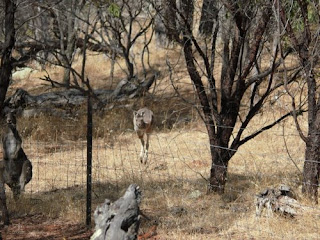 The movement of birds, insects, and reptiles, across their territories is unhindered by fences in the area, and it’s our desire for this to be the case with mammals as well.

So, below we have a thornbill looking out from its roosting-place after feeding and territorial movements with other thornbills and also other species of feeding birds around the block. 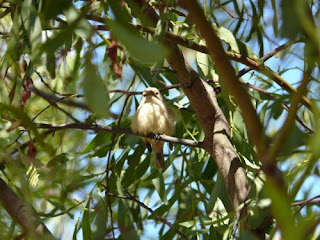 There are photos of a golden whistler, 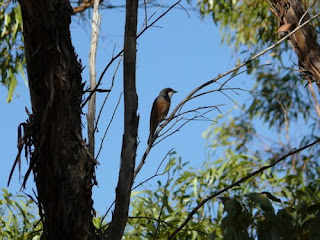 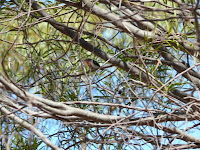 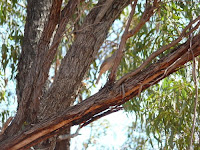 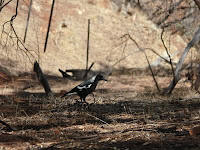 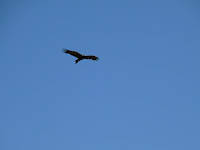 
and white-chinned honey-eaters gathered around a hairline fracture on the twenty-thousand-gallon rainwater tank, gripping the oxidation and lime extrusion to drink, in the hot, dry atmosphere of the place. 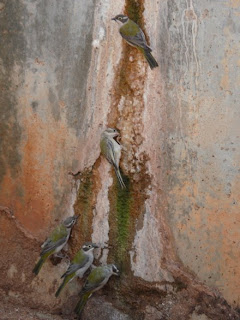 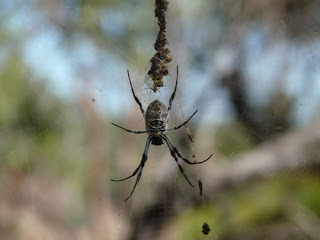 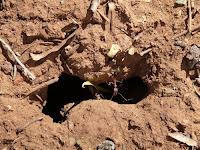 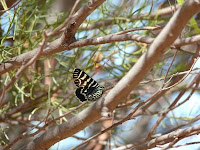 Yesterday was a stormy day throughout the district. When we arrived back at Jam Tree Gully, Tracy flicked the power on (we keep it off whenever possible and by October, as we’ve noted before, plan to be entirely without electricity other than some solar cells to use only when absolutely necessary), and found that no water was coming out of the taps.

This meant the pump had gone — we are not on mains water supply but rather have a massive concrete rainwater tank plus two air-pumped bores as back-up. I went out to check the pump, and found the housing around the power outlet that drives the electric pump entirely shattered.

A storm was in progress so I couldn’t look closely but we discovered today via Mum and J. (who went out for a visit) that it had been lightning-struck — with a six-inch-long and one-inch-deep scar in the concrete wall of the tank, the electrics burnt out, and concrete shrapnel everywhere.

The lightning strike had followed one of the oxidised hairline cracks through the thick concrete (reinforced with steel mesh inside) — a thin line of moisture that completed the circuit so to speak, allowed the arc across the gap, to discharge.

I’d been working out in the storm, and given I’ve been struck by lightning in the past, and been in planes and houses struck by lightning on more than a few occasions, as J. said, another chapter has been added to my memoir of ‘lightning and me: a relationship’!

A few weeks ago, I wrote a poem about being on the top of the hill (which is really the north-easternmost edge of the Darling Range, looking out into the wheatbelt), and watching a storm brewing, so powerful that it looked like a storm within a storm. That poem will appear in a special issue of TriQuarterly edited by Ed Hirsch and due out next year, I think. It is certainly a poem that is central to my gradually-taking-shape Jam Tree Gully/Walden manuscript of poems.

Speaking of which, on the WW Norton Poems Out Loud website, a related piece of mine entitled ‘Visitors’ has just appeared. It looks at the relationship between what I am doing and Thoreau’s Walden, and includes another poem from the manuscript.

No doubt I will have more to say down the track on the lightning incident. It will obsess me. One thing that has come out of it, or, rather, something Tracy and I had been thinking of doing anyway, that is now confirmed, is to place another water-tank further up the hill on the block so as to entirely gravity-feed the house. When we are off-grid, a water pump won’t work anyway (though we will retain it with a solar cell for back-up); anything that relies on gravity is altogether more reliable and more sensible. The hill is very steep, and the storm forces that gather overhead concentrate on this high-point of stone and trees, so why not make use of it?
Posted by Mutually Said: Poets Vegan Anarchist Pacifist at 2:15 PM